Yep, coming September 29th if you own a PS3, Xbox360 or a PC, you can download the beta for Battlefield 3 Multiplayer. Those who pre-ordered the Limited Edition of medal of Honor can get the beta on September 27th, now don’t you feel special? The beta is set in Paris on the Operation Metro map, where players work their way from lush parks on the outskirts of the city to a dark, bombed-out metro station, to the vibrant streets around the Paris stock exchange. Two elite tactical units square off in the series’ popular Rush Mode. One side takes the offensive by attacking M-COM stations while the opposing squad defends and protects. 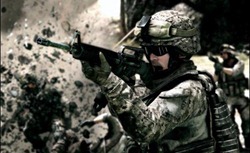 Battlefield 3 is one the year’s most anticipated games, having won over 50 illustrious awards at all of the gaming industry’s major tradeshows. The game recently earned the coveted “Future Game Award” at the Tokyo Game Show, a prize that follows the honor of “Game of the Show” at GamesCom and “Action Game of the Show” at E3. Lauded by game critics for advancing the state of the art in gaming, Battlefield 3 is the only shooter that can deliver the physicality and emotion of being on the battlefield. It is thanks to the expertise of the development team at DICE and the power of the Frostbite™ 2 engine that Battlefield 3 delivers a massive sense of scale, best-in-class audio, completely destructible environments, hyper-real graphics and animation, and lets gamers pilot a whole range of vehicles from trucks and tanks to choppers and jets. Gamers that pre-order the Battlefield 3 Limited Editionwill receive the Back to Karkand post-launch digital expansion pack at no extra charge.* This themed multiplayer pack features four highly celebrated maps from Battlefield 2™, each now boldly re-mastered using Frostbite 2. Completing the package are classic Battlefield 2 weapons and vehicles, unique rewards, new achievements/trophies, and more. Pre-order theBattlefield 3 Limited Edition now at http://store.origin.com/battlefield3.

For more information about the beta, players should visit www.battlefield.com/beta