Where do they come up with these names? Seriously @TV or ‘at TV‘? Why? Anyway, the new @TV will let you watch live and recorded TV anywhere on your phone or tablet or even laptop. You can use it with Android, iOS, PC or even Mac. Price will be $149.99 but you’ll also need to pay $12.99 for the app on your smartphones. 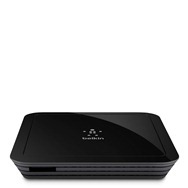 -Belkin, creator of people-inspired consumer technology products, today announced a new way to watch, record, and experience television content at home or on the go with @TV. @TV works over Wi-Fi® or a 3G/4G network and allows users to access all content from their home theater on tablets, smartphones, and laptops.

“Americans have long had a love affair with TV, and now they are increasingly demanding the ability to access their TV content wherever and whenever they want. It’s no longer enough to record content to watch later”

“Americans have long had a love affair with TV, and now they are increasingly demanding the ability to access their TV content wherever and whenever they want. It’s no longer enough to record content to watch later,” said Jamie Elgie, senior director of product management at Belkin. “With @TV you aren’t limited to certain channels, and you have full access to both recorded content and live TV, so it’s easy to watch the game in the backyard or your favorite movie at the dentist.”

@TV works with both standard and high-definition programming and can connect and control multiple sources, such as a digital cable box, satellite receiver, or DVD player. @TV’s easy-to-use channel guide makes it simple to control live or recorded content directly from a mobile device. Unlike competing products, @TV also has Wi-Fi built in and can record live TV directly to a mobile device for viewing when not connected to Wi-Fi or a data network.

@TV works with the @TV mobile app, which is available for both iOS and Android platforms. The @TV app is free for tablets and $12.99 for smartphones. The apps are available from the Apple App Store and Android Market.

Works with the @TV app

Compatible with both Mac and PC, Android and iOS devices

@TV plus will be available in mid-July at Belkin.com and other online and in-store retailers in the U.S. The @TV app will be available for download from the Apple App Store or the Android Market in early July.