I believe I posted about this a little while ago, but now you can get it in North America. BioShock Ultimate rapture Edition is out now and it includes BioShock 1 and 2 along with over $40 of additional content in-game and some physical extras as well. 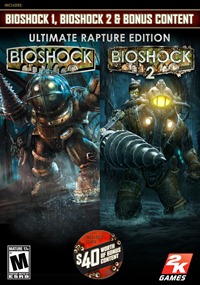 Originally released in 2007 and winner of multiple Game of the Year awards, BioShock is a "genetically enhanced" first-person shooter set in Rapture, a decaying art deco underwater utopia torn apart by civil war. Caught between powerful forces and hunted down by genetically modified "splicers" and deadly security systems, players have to come to grips with a deadly, mysterious world filled with powerful technology, fascinating characters and morality defining choices. To make it to the end, players can turn everything they encounter into a weapon, biologically modify their body with Plasmids, hack devices and security systems, upgrade weapons, craft new ammo variants, and experiment with different battle techniques. No encounter ever plays out the same and no two gamers will play BioShock the same way.
Originally released in 2010, BioShock 2 features an unsettling storyline, dazzling visual design and the evolution of the genetically enhanced shooter gameplay. Set almost a decade after a grueling civil war consumed the once magnificent city of Rapture, evil reverberates through the halls and a wickedness once thought gone forever returns along the Atlantic seaboard. An unspeakable series of kidnappings from local seaside communities by an unseen monster leads to the repopulation of Little Sisters in Rapture’s failed utopia under the ocean. Players must step into the boots of one of gaming’s most iconic characters, the Big Daddy, as they traverse the fallen city, fending off attacks from an army of genetically modified Splicers, while searching for escape and the key to their survival.
BioShock 2 also features multiplayer modes that provide fans with an engrossing prequel experience that expands upon the fiction of Rapture’s origins. Set during the year before Rapture’s descent into chaos, players assume the role of a Plasmid test subject for Sinclair Solutions, a key provider of Plasmids and Tonics in the underwater city that was first explored in BioShock. Players will enter into areas from the original title as they struggle to gain superiority and fight for survival in franticly paced battles.
BioShock: Ultimate Rapture Edition is rated M for Mature by the ESRB.
For more information, please visit http://www.bioshockgame.com/ultimaterapture.