I’ve been meaning to subscribe to Amazon prime, not just for the shipping but for the video service as well. I think I could save a bit of money with the free shipping part as we do order a lot from Amazon, especially around the holidays. The Instant Video though is something I’ve been interested in, I’ve noticed that Netflix doesn’t have the selection it once had, at least of good stuff, sure they have tons of B movie crap but not much really good anymore. I was hoping Amazon Instant Video might provide a better alternative to Netflix… Anyway, you can now get it on the Wii, but I’m not sure why you’d want to as it’s not exactly HD… 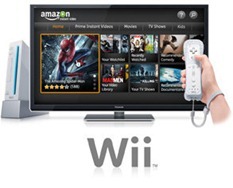 Amazon today announced the launch of the Amazon Instant Video app on Nintendo’s Wii console, providing customers with access to the Amazon Instant Video library of more than 145,000 movies and TV episodes. The app is already available on Nintendo’s new Wii U console that launched November 18th and is being enjoyed across the United States. In addition, the app gives Amazon Prime members access to more than 33,000 movies and TV episodes to stream at no additional cost. For more information on how to get started visit, http://amazon.com/instantvideo/wii.

Starting today, the free Amazon Instant Video app can be found in the Wii Shop Channel for customers to easily download and install on the console. The Wii Remote Plus controller lets customers easily browse and search for titles.

“We’re focused on providing our customers with many choices to make their entertainment experience enjoyable and as easy as possible – whether it’s offering a wide selection of hit movies and popular TV shows, or a variety of ways to instantly stream all the content available in the Amazon Instant Video library,” said Anthony Bay, Vice President of Worldwide Digital Video for Amazon.com. “Today, bringing the Amazon Instant Video app to the Wii console means we’re giving our customers even more ways to easily and instantly watch the videos they want right at home.”

“Since it arrived in November of 2006, Wii has been a cultural phenomenon,” said Duncan Orrell-Jones, Senior Vice President, Network Business, Nintendo of America. “With more than 40 million units purchased in the U.S. alone, the addition of Amazon Instant Video means more choice across a significant portion of the American entertainment landscape.”

Smart lists such as “Recently Watched,” “Watchlist,” “Genre Recommendations” and “Your TV Shows” that allow customers to easily manage their viewing choices

Whispersync lets customers seamlessly switch from one device to another. Start streaming a movie on Kindle Fire, then pick up right where you left off on your Wii console – avoid the frustration of having to find your spot

The Amazon Instant Video app for Wii offers more than 145,000 movies and TV episodes to browse, buy, rent and stream, including the latest new release movies like The Dark Knight Rises, Brave, The Amazing Spider-Man, Taken 2, The Bourne Legacy, Marvel’s The Avengers, ParaNorman, and Frankenweenie, and popular TV shows like The Walking Dead, Sons of Anarchy, American Horror Story, Revolution, and Big Bang Theory. Most current TV shows can be purchased by individual episode or at a discount with a TV season pass.

In addition to receiving free two-day shipping on millions of items and access to thousands of books from the Kindle Owners’ Lending Library, Prime members can instantly stream more than 33,000 TV episodes and movies, all for just $79 a year. The Prime Instant Video library includes popular TV shows such as Fringe, Parks and Recreation, Downton Abbey, Parenthood, Glee, and The West Wing, new release movies such as Mission Impossible: Ghost Protocol, Hugo, Thor, The Adventures of Tintin, The Expendables and Rango, and popular kids TV including SpongeBob SquarePants, Dora the Explorer, and Phineas and Ferb. Non-Prime members can start their free one-month trial today.