I need to upgrade, I don’t have a 1150 CPU, but I need one as it’s the latest thing out there and in this business you need to have the latest right? Anyway, Biostar has just announced the Hi-Fi Z97WE motherboard that features Intel Smart Technologies and uses the latest Intel Haswell Socket 1150 CPUs. It’s an ATX board with support for up to 32gb of ram and a Lan controller that support 10/100/1000/2000 and it even has an HDMI port that supports up to 4K resolution. Lots more details below for you.. 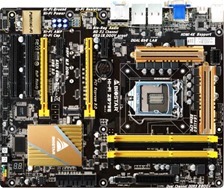 BIOSTAR, maker of embedded/IPC solutions, graphics cards, and motherboards has introduced Intel’s next generation Haswell based motherboard, the Hi-Fi Z97WE. It comes with many BIOSTAR in-house features such as “Hi-Fi” audio technology.

It includes the usual high-end motherboard features like USB 3.0, HDMI and PCI-E slots, as well as the newest PCIe development, the “M.2” form factor. The M.2 standard is the newest and smallest form factor implementation of the SATA Express interface (which provides support for PCI Express 3.0 and Serial ATA 3.0), with the addition of an internal USB 3.0 interface. It supports multiple functions for add-in cards, including the Wi-Fi, Bluetooth, satellite navigation, near field communication (NFC), digital radio, Wireless Gigabit Alliance (WiGig), wireless WAN (WWAN), and solid-state drives (SSDs).

But being a BIOSTAR board, there is a premium set of features including the company’s unique “Hi-Fi” technology. All the BIOSTAR Hi-Fi series motherboards areequipped with isolate circuit design and high quality components to ensure the best possible audio quality consistency.

The Hi-Fi Z97WE also features BIOSTAR’s dual Gigabit LAN card functionality that takes networking and gaming to new levels. To achieve this, the Hi-Fi Z97WE has “dual Gigabit LAN” connections on the board that allow simultaneous LAN connections. The primary advantage is the doubling of bandwidth which allows the network bandwidth of 1G to become that of 2G. It also allows for Full-duplex transmission. Two network cards can be simultaneously transmitted to upload and download at the same time. In addition, there is zero packet delay with two high-speed gigabit networks, giving super high data transmission efficiency. Another major advantage is “Load Balancing” which allows users to attach both network adapters to a single network. It will therefore support the aggregation “teaming” function by merging the two connections to support multiple aggregation modes.

In addition, with BIOSTAR’s dual Gigabit LAN connections you get network insurance. These boards come with two Gigabit Ethernet lightning protection circuits, there are cross-efficient in reducing the probability of damage from lightning or other power surge. So if one connection is disabled the other connection will automatically kick in.