I remember a time when we didn’t have flashes on phones for the cameras, I remember a time when we didn’t even have cameras on phones, but whatever, point is that the flashes on phones sometimes aren’t the best but there’s a possible solution for that and it’s called the iblazr. The iblazr is from BiteMyApple and it is a four LED flash attachment for you phone that plugs into the headphone jack and it work with iOS and Android devices. It’s new of course so compatibility is still getting there but from what I’ve read it works with many Android phones already. Price is $50 and it has a built-in battery that should provide up to 1,000 flashes on a single charge. 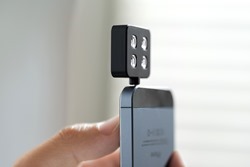 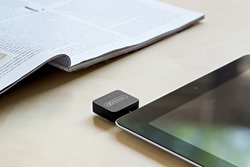 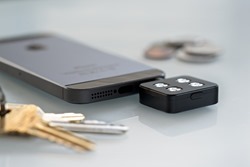 iblazr is the portable flash solution to a smartphone camera’s struggles in low light settings. This powerful, compact device not only better illuminates subjects, it helps users take better photos. The iblazr connects to the audio jack of any Android phone or iPhone and provides limitless possibilities for creating great photos.

“Smartphones and tablets allow us to take high-quality photos anywhere, but the built-in flash isn’t enough during low-light settings,” says Chris Johnson, Founder of BiteMyApple.  “The iblazr provides users with the same illumination capabilities that a high-end camera provides. You can use the small external flash with your front or back camera so you’ll get the perfect shot or selfie every time.”

The iblazr’s flash includes four hi-end American CREE LEDs which provides great light to take a stunning photo. It also comes through 60 degree optics for a softer look on subjects. Additionally, the position of the iblazr cuts out red-eye or white-eye.

One of the best features of the iblazr is its built-in, rechargeable 200mAh battery.  This included power source means that it won’t drain your smartphone’s battery, and it allows more than 1,000 flashes on a single charge or up to 40 minutes in full power and constant light mode which is ideal for taking videos.

The iblazr offers a free Android and iOS app to adjust various settings, including the intensity of the light. It also contains other smart functions like social networking, sharing, support and more.

The iblazr comes with unique multifunctional USB charger.  It can be used as light source for macro shots, a backlight for a keyboard, or as a compact table lamp by connecting the iBlazr to your charger.