Today seems to be a good day to release games apparently with the new Cabela’s Big Game Hunter 2012 hitting the stores today.  The game comes bundled with the Top Shot controller as well to make the hunt that much more realistic for you. It’s available on the Wii, Xbox 360 and the PS3 right now! I like games that come with something like the gun included here, it just makes me feel like I’m getting more from my money.. 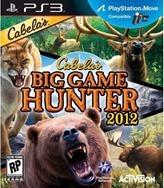 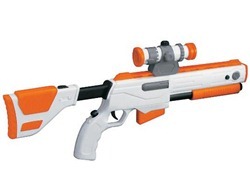 Cabela’s Big Game Hunter 2012 is available now and packed with global adventure. Featuring a large expanse of diverse terrain, plenty of great gear and the wildest animals yet, the game will sink its teeth into players and never let go! Cabela’s Big Game Hunter 2012 is available with the popular Top Shot Elite peripheral to deliver gamers a more realistic experience.

Cabela’s Big Game Hunter 2012 includes more choice than ever as player’s decisions affect every hunt as they choose their path, exploring all kinds of different environments. For example, players can climb an area to get a better angle for the shot or take a low elevation route with poor visibility but plenty of concealment. The innovation doesn’t end there though as the game ups the ante with the most realistic animals ever seen in the Cabela’s series. Every animal’s unique movement gives clues on what they will do next. It’s like they can see, hear and smell you.

Cabela’s Big Game Hunter 2012 offers some of the coolest hunting rifles and shotguns available. Players always have access to the right gear as they purchase upgrades, producing visible strengths and weaknesses for each situation. Having the best stuff is only part of the equation though as players will have to master advanced shooting techniques such as accounting for wind direction and bullet drop.

Cabela’s Big Game Hunter 2012 is out now on the Xbox 360® video game and entertainment system from Microsoft, PlayStation®3 computer entertainment system and Wii™ from Nintendo. The game is available either bundled with the innovative Top Shot Elite wireless controller on Xbox 360 and PS3 and a peripheral on Wii, or it can also be purchased separately. This game is rated T for Teen by the ESRB. For more information please visit www.ActivisionHunts.com and follow on Twitter and Facebook – @ActivisionHunts – Facebook.com/ActivisionHunts.