Blah, so I totally misread this PR at first and I went to download this from Google Play and then tried the Amazon appstore and couldn’t find it. I went back to the PR and read it more  closely only to find out that it’s only out for iOS right now with Android coming soon, sometime in the future. Oh well, Apple gets all the good stuff first…

Capt. Price.  Soap MacTavish.  Mike Harper.  For the first time, players can enlist some of the most legendary characters from the hallowed halls of Call of Duty®: Modern Warfare® and Call of Duty®: Black Ops II universes in an all-new mobile experience, Call of Duty®: Heroes.  Available now for download on the App Store and Windows Store, Call of Duty: Heroes is a free to play, 3D combat strategy game that gives players an exciting new way to experience Call of Duty on smartphones and tablets.  Gamers have the ability to customize their base and train elite forces, including these iconic heroes and more from the famed Call of Duty® lore, to take on enemies in fierce mobile battles with friends and other players. 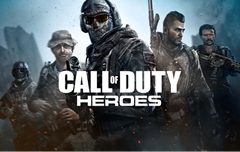 In Call of Duty: Heroes players take command of a small outpost to build and upgrade it into an impenetrable base, utilizing a number of weapons and equipment options, including sentry guns, SAM turrets, mines and more than 30 upgradeable structures.  Gamers can direct and level up five legendary Call of Dutyheroes such as Capt. John Price and Sgt. John “Soap” MacTavish from the Modern Warfare series and Call of Duty: Black Ops II’s JSOC operative Mike Harper and more.  Take them into battle while also unleashing epic killstreaks, including the UAV, care packages, drone strikes and chopper gunner as well as tactical expertise unique to each.  Gamers even have access to a broad range of hailed Call of Dutyinfantry and drones, including Juggernauts, Dragonfires and CLAWs.  Players can also team up with friends to form alliances, donate troops and take down opponents while earning in-game rewards.

“Call of Duty: Heroes brings back these iconic characters from across the Call of Duty franchise to play once again in an all-new experience created for mobile players,” said Jeremiah Maza, executive producer, Activision Publishing, Inc.  “And it’s all focused on the fun.  There’s nothing like calling in heavyweights like Capt. Price or Mike Harper and rolling into a new mission right from your phone or tablet.”

Published by Activision Publishing, Inc., a wholly owned subsidiary of Activision Blizzard and developed by China-based Faceroll, Call of Duty: Heroes is available for free on the App Store for iPhone, iPad, and iPod touch* or at www.AppStore.com/CODHeroes. Call of Duty: Heroes is also available on the Windows 8 Tablet and will be coming soon to Google Play and the Amazon Appstore.