OCZ announced this morning the launch of the Sabre 1000 series of SSDs which are enterprise class which works for me as I think business or enterprise class products are better and more reliable but that just could all be in my head?! The Sabre 1000 series uses the barefoot 3 controller and  comes in 240gb, 480gb and 960gb in capacities. Speeds are decent, the PR says they’ll get 550mb/s read and 470mb/s write. 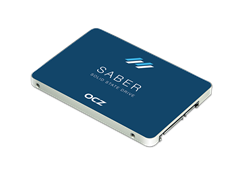 The new series leverages the latest A19nm NAND flash from Toshiba and is available in 240GB, 480GB and 960GB usable capacities.  It utilizes OCZ’s internally developed Barefoot 3 controller and firmware which delivers consistent sustained I/O performance across all capacities to accelerate enterprise applications.
“In hyperscale and distributed computing environments, a majority of the servers are performing high read activity tasks,” said George Crump, Founder and Lead Analyst, Storage Switzerland.  “For these read-intensive environments, an SSD, like OCZ’s new Saber 1000 that provides high capacity, predictable performance and enterprise-level support – at favorable acquisition costs – is an ideal fit.  This product provides an excellent opportunity for OCZ to expand its enterprise footprint into this evolving market segment.”
“In designing the new Saber 1000 Series we listened to our customers to meet their growing needs for a server-class SSD that is optimized with the right balance of features, performance and cost,” said Daryl Lang, CTO for OCZ Storage Solutions.  “With the Saber 1000 Series, customers now have an ideal storage solution in which to build an all-flash datacenter, one that is able to efficiently process high volume enterprise and hyperscale workloads.”
In a steady state condition by which the Saber 1000 Series 960GB drive is writing, erasing and re-writing data repeatedly over its full capacity, the performance for both large block sequential operations, as well as small block random operations, is at the top of its competitive class with specifications that include:

The Saber 1000 Series is ideally suited for read-intensive applications such as read cache and indexing, Video-On Demand (VoD), Virtual Desktop Infrastructure (VDI), media streaming, front-end web server, cloud infrastructure, online archiving, Customer Relationship Management (CRM), and Enterprise Content Management (ECM), to name a few.  Additionally, low 3.7 watts of power are typically consumed in an active state that helps to shrink datacenter energy needs while leading to additional savings due to reduced cooling requirements.
In the event of a sudden power loss, the Saber 1000 Series uses a technique referred to as Power Failure Management Plus (PFM+) which holds up the SSD circuitry long enough to ensure the integrity of the device so that it can be fully operational again once power is restored.
Monitoring and management is driven to new levels with OCZ’s value added StoragePeak 1000 SSD Management System that enables IT managers to centrally monitor and administer connected Saber 1000 SSDs and other OCZ enterprise class solution resources from a web-based management interface.  This network-accessible management system securely connects to multiple hosts (running Linux or Windows operating systems) providing a cross-platform view of the OCZ SSDs connected to servers, storage arrays or appliances, and includes a user configurable alerting systems that enables IT corrective actions to be initiated at an early stage.
More information on the Saber 1000 SSD Series, as well as OCZ’s complete portfolio of enterprise products, is available at www.ocz.com/enterprise.