Hey, I’m on AT&T and it looks as though they’re finally doing some catch up with the other companies.  Honestly I don’t care about the rest, I want the Samsung Infuse, it’s got a 4.5” screen and a 1.2Ghz CPU in it!!! WOW!  Read on for the a plethora of AT&T news and things to come from them or look forward to if you’re an AT&T customer.

NETWORK: AT&T operates the nation’s fastest mobile broadband network today, and it’s getting faster in 2011 with 4G.  AT&T is the only U.S. company committed to delivering 4G using both HSPA+ and LTE technologies – providing a faster and more consistent experience for customers. The company announced plans today to accelerate its LTE network build, to be largely complete by yearend 2013; AT&T plans to begin its launch of LTE service in mid 2011. Additionally, the company said it has completed its deployment of HSPA+ to virtually 100 percent of its mobile broadband network which enables 4G speeds when combined with Ethernet or fiber backhaul. The company is rapidly expanding Ethernet and fiber to cell sites nationwide — adding new cell sites weekly — and by yearend, expects that nearly two-thirds of its mobile broadband traffic will be on expanded backhaul.

Today, AT&T is already seeing 4G speeds on its existing HSPA+ network with enhanced backhaul in areas of key markets. In these areas, AT&T is seeing network speeds up to approximately 6 Mbps** — and expects these speeds will increase as it accelerates its LTE build and further deploys expanded backhaul.

SMARTPHONES & DEVICES :  AT&T is the leader in smartphones and devices, and expects to widen that lead in 2011. The company plans to introduce 20 4G devices by the end of the year, some on an exclusive basis. The company today announced a new commitment to deliver an industry-leading Android portfolio, including more than 12 new Android devices in 2011. AT&T expects to offer two 4G smartphones in the first quarter which will join its two existing 4G-compatible laptop cards, available since last fall.  AT&T plans to offer five to seven 4G devices in its lineup in the first half of 2011.

APPLICATIONS: AT&T provides its customers access to more mobile applications than any other carrier. In 2011, the company plans to expand its leadership in apps with new initiatives to speed collaboration with apps developers and further open AT&T’s network capabilities to the development community.

"The key to delivering a true 4G experience is to have the combination of network, devices and applications, which together will give our customers the best and most advanced mobile broadband experience –  today and tomorrow,"  said Randall Stephenson, AT&T chairman and CEO. "Recent tax law incentives, along with other policy developments, have allowed us to accelerate the capital investment — beginning in 2011 — to largely complete our LTE network build by the end of 2013. This will not only benefit our customers, but will, we hope, benefit the economy as a whole."

Ralph de la Vega, president and CEO of AT&T Mobility and Consumer Markets, said AT&T has the nation’s fastest mobile broadband network today, according to independent expert testing, and its network roadmap will distinguish AT&T as the industry moves towards 4G/LTE technology over the next several years. He spoke at AT&T’s Developer Summit, held annually in conjunction with the 2011 International Consumer Electronic Show (CES) in Las Vegas.

"AT&T is the only U.S. company committed to both HSPA+ and LTE technologies," said de la Vega.  "Today our customers are benefitting as we repeatedly increase speeds on our mobile broadband network.  As we accelerate our LTE network build, our customers will have blazing fast LTE speeds and when they go off LTE, they will still have faster mobile broadband speeds with HSPA+ — something our competitors will not be able to match." 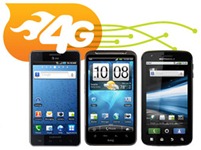 On the device front, de la Vega said AT&T plans to offer 20 4G devices in 2011.  In the first half of 2011, AT&T plans to feature a best-in-class portfolio of HSPA+ devices; in the second half of the year, it plans to also add LTE devices, including a leading collection of smartphones, tablets, modems and mobile hotspots.

"Today we are the clear leader when it comes to offering the most extensive line-up of handsets and devices," he said.  "We plan to strengthen our portfolio with powerful 4G devices and a major new commitment to offer an industry-leading portfolio of Android devices."

"The upcoming lineup of 4G Android smartphones from AT&T is truly cutting-edge," said Andy Rubin, vice president of Engineering at Google. "These devices coupled with the recent deployment of carrier billing as an Android Market purchase option for AT&T customers are great examples of AT&T’s commitment to smartphone leadership."

With over 100,000 applications available in Android Market plus carrier billing, AT&T customers can more easily shop for the latest apps for Android smartphones.

Additional device specifications and images are available at www.att.com/ces-news.

AT&T also announced that it is building on its leadership in mobile applications by expanding collaboration opportunities with the development community — with a focus on speeding innovation to customers.

A leader in the application development community said AT&T’s strategy makes sense: "AT&T is moving quickly to open its network to developers in unprecedented ways," said Sam Ramji, vice president of strategy for Apigee.  "Our work with AT&T will give developers easy access to network capabilities and billing tools.  AT&T’s commitment to working with the developer community makes the company a leading platform for innovators."

AT&T CTO John Donovan said AT&T, in collaboration with others, is investing $70 million to build three innovation centers worldwide – an effort considered unprecedented in working with the app developer community.   He said the first center is planned to open in the first quarter near Dallas.  The other two – in Silicon Valley and near Tel Aviv – are slated to open later this year.  The centers are designed to foster collaboration and improve project cycle time from idea to market by threefold.

*AT&T products and services are provided or offered by subsidiaries and affiliates of AT&T Inc. under the AT&T brand and not by AT&T Inc.

**4G speeds delivered by HSPA+ with enhanced backhaul. Will be available in limited areas.  Availability increasing with ongoing backhaul deployment.   Actual speeds experience will vary and depend on several factors include device, location, capacity, facilities, and other conditions.