Now this is a game I want for my Android tablets, but apparently I’ll have to wait until ‘early next year’ which I’m guessing is 2013, and that’s a long time to wait. Anyway, you iOS users can get in on the fun now though and go grab Combat Arms: Zombies for only $4.99 until January 13th, then the price goes up to $6.99. Be sure to check out the option to get the PC version of Combat Arms for free for PC… 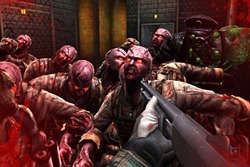 Nexon Mobile Corporation has launched “Combat Arms: Zombies,” the first 3-D first-person-shooter (FPS) that utilizes the Unreal Engine 3 in the Apple App Store today. Currently, it is available on all iOS devices, including the iPad, iPod and iPhone. It will be available on Android devices early next year.

In addition to boasting superior content and graphics, the game is the first FPS for mobile devices that supports five controls and allows users to explore the diverse attack patterns of 3-D Zombie Mode. The in-game arsenal is packed with high-intensity weapons mirroring those used in real life combat. First previewed by the public at G-Star 2011 in November, “Combat Arms: Zombies” received positive feedback from booth visitors who participated in a hands-on demo of the game.

To celebrate the release in the App Store, Nexon Mobile is offering “Combat Arms: Zombies” at a special introductory price of $4.99, discounted from $6.99, until Jan. 13, 2012. Additionally, those who download and play the mobile version for one month will receive game codes to redeem in the PC game, “Combat Arms,” for specific in-game items.

Visit the Apple App Store to download and purchase the game: http://itunes.apple.com/WebObjects/MZStore.woa/wa/viewSoftware?id=480072547&mt=8.