It’s been a long time since I’ve reviewed any flash drives, I used to get them all the time for review, but it’s slowed down. I think they’re just not as popular as they once were, but I think they’re still very useful. Corsair has just announced the Flash Voyager GTX which can be had in either 128gb or 256gb capacities with MSRP pricing at $120 for the 128gb or the $240 for the 256gb. 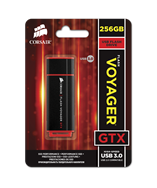 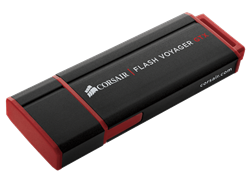 Corsair®,  a worldwide leader in high-performance components to the PC hardware market, today announced the availability of the Flash Voyager® GTX USB 3.0 flash drive that was announced at Computex in June. Available in 256GB and 128GB capacities, the Flash Voyager GTX is the fastest USB flash drive Corsair has ever produced, offering blisteringly fast peak transfer speeds of up to 450MB/sec read and 350MB/sec write, vastly reducing waiting time when accessing or transferring files on the go.

The Flash Voyager GTX boasts the inner technologies of an SSD that will keep the drive operating at peak performance for years to come. USB Attached SCSI and S.M.A.R.T. monitoring ensure blazing fast, error-free transfers of large video music and photo collections, while TRIM support curbs degradation so the Flash Voyager GTX retains its performance, even after extended heavy use. Compatible with both USB 3.0 and USB 2.0, the Flash Voyager GTX works on Microsoft® Windows®, Mac OS® X, and Linux® with no additional software required.

With up to 256GB of storage, Flash Voyager GTX’s enormous capacity options ensure that even the largest files, such as operating systems, game installs or high definition video projects, can easily fit on the drive alongside other multimedia content — with plenty of room to spare. Take your favorite games with you to a LAN party, or quickly transfer your whole movie collection for easy viewing later. It’s the perfect storage gadget for any student, content-hoarder, or computer power user.

The Flash Voyager GTX flash drives are available immediately through Corsair’s worldwide network of authorized distributors and resellers. The drives are backed with a five-year warranty and Corsair’s well-earned reputation for quality, compatibility, and performance.

Suggested retail pricing is as follows: