Two fans are better than one right, especially when it comes to CPU cooling and Corsair knows this and that’s what they included with their latest liquid CPU cooler, the H75. The new Hydro Series H75 liquid CPU cooler is a closed loop type cooler requiring virtually no maintenance. The cooler includes a nice large copper water block and of course the two fan which are both 120mm in size. Since the cooler uses those 120mm fans, this makes it small so it should fit fine into most cases out there so you can have the performance of liquid cooling without the hassles. MSRP is $84.99 and it will be out sometime in November to purchase… 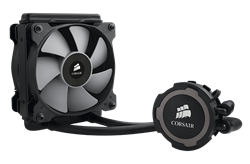 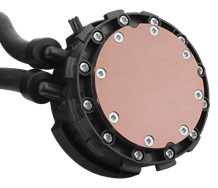 Corsair®, a worldwide designer of high-performance components for the PC hardware market, today announced the Hydro Series™ H75 dual-fan 120mm liquid CPU cooler. The easy-to-install H75 provides PC users with quieter and more effective cooling than stock CPU coolers, all in a 120mm footprint that is widely compatible with most PC cases on the market. The Hydro Series H75 will be available in November at a suggested retail price of $84.99 (USD).

The Hydro Series H75 is comprised of a low-profile CPU cooling block connected to a 120mm radiator and fan assembly via kink-resistant rubber tubing. The H75’s new cooling block is designed with a micro-fin copper cold plate and a high-quality, ceramic bearing pump that provides reliable, low-noise heat transfer away from the CPU. The slim 25mm thick radiator is surrounded by  dual SP120L PWM 120mm fans resulting in design that is quieter and thinner than other dual fan coolers, and more effective at dispersing heat than single fan designs. The H75’s fans work with PWM motherboard fan headers, allowing users to control the fan speed and noise levels from their motherboard’s built-in software or BIOS.

“The H75 is a great choice for PC enthusiasts who want the streamlined features of our H60 120mm cooler but desire the additional cooling performance of a dual fan design,” said Xavier Lauwaert, Director of Product Marketing at Corsair.

The Hydro Series H75 features a simple, tool-free mounting system and wide Intel and AMD socket compatibility. Like all Hydro Series liquid CPU coolers, the H75 is completely self-contained and does not require filling or maintenance.

Support for AMD and Intel CPUs

A video overview the Hydro Series H75 and the installation process can be viewed here: http://www.youtube.com/watch?v=wvaiECein68

Priced at $84.99 MSRP in the United States, the Hydro Series H75 liquid CPU coolers will be available in November from Corsair’s worldwide network of authorized distributors and resellers. The cooler is backed with an industry leading five-year limited warranty and Corsair’s excellent customer service and technical support.