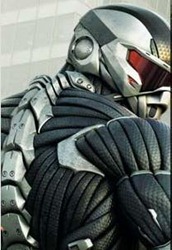 Yes that says Crysis is coming to XBL and PSN. It’s a special version though, it’s been fully remastered for the consoles with all new lighting, effects and other visual optimizations. It will be available October 2011 for $19.95 or 1600 Microsoft Points.

In 2007 and again in 2011, critics around the world hailed Crysis and Crysis 2 as titles that ushered in the next-generation of gaming with jaw-dropping visuals, industry leading technology and groundbreaking sandbox gameplay, featuring the super-powerful Nanosuit. Today, the original, award-winning 2007 single-player campaign has been remastered for Xbox LIVE® and PlayStation® Network with optimized Nanosuit controls, fine-tuned combat and full stereoscopic 3D support.

For more information on Crysis, please visit http://crysis.ea.com or http://mycrysis.com