Speaking of tablets the new eLocity A7+ Android tablet is now available and it’s more reasonably priced at $229.99. Yes it only has a 7” screen and the specs are slightly less than the Xyboard, but the specs are close though and it’s a couple hundred dollars less. I guess it all comes down to what you need and what kind of money you have to spend on a tablet that will most likely be obsolete in a couple months… 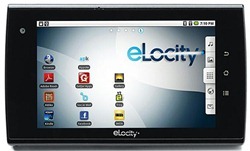 Stream TV Networks announced that the newest tablet in its eLocity product line, the eLocity A7+, will go on sale with major retailers J&R and NewEgg.com online on Monday, December 05, 2011 for $229.99 MSRP. ShopNBC will begin airing customized eLocity A7+ value bundle sales on December 8th to the 19th, 2011. The eLocity A7+ is a limited edition release for the holiday season and will be sold only until quantities last. Once orders are placed, units will begin to ship to consumers immediately.

The A7+ takes the Amazon Fire and B&N Nook tablets head on with a more powerful CPU, the Tegra 2 processor, full Flash, full local browser keeping your data private, GetJar App Store with thousands of apps and expandable memory of up to 100GB at the same price as the Amazon Fire.

The eLocity A7+ leads the seven-inch tablet market with a high screen resolution of 1024 x 600 on a four-point multi-touch screen. Like the A7, the A7+ will include HDMI and USB 2.0 ports supporting up to 64GB, as well as a MicroSD slot that supports up to 32GB of expandable storage. Like the original eLocity A7 seven-inch tablet launched in August of 2010, the new seven-inch A7+ tablets will run the Flash-enabled Android OS with the powerful dual-core NVIDIA Tegra 2 processor. Full specifications are outlined below.