Griffin continues to put out unique iOS device based accessories including today’s review product – the HELO TC. This twin-rotor remote-controlled helicopter uses a free app on the iPhone/iPod Touch to control its flight capability. Unlike the expensive Patriot AR Drone this flyer comes in under $50.

What differentiates using the HELO TC from other remote-controlled helicopters is the ability to use the built in accelerometer of the iOS device to steer this whirlybird. In addition the app allows three separate flight plans to be recorded and stored.

The HELO TC arrives in a black cardboard box with a clear window showing the remote helicopter inside. On the back is an image of the HELO TC in action. Scattered around the package are features of the device. 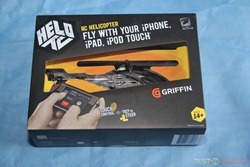 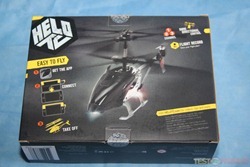 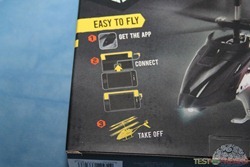 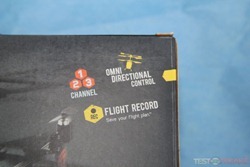 Inside the box we find the HELO TC, an instruction/flight manual, a charging USB cable, the Flight Deck IR blaster, two spare rotors and flight blades. 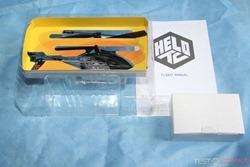 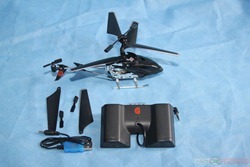 At initial glance the HELO TC looks like a helicopter from a military movie. It’s composed of black plastic and metal. The front 1/3 is covered by polycarbonate shell including a black tinted cockpit. Behind this plastic area we see the metal body of the HELO TC along with an on/off switch and charging port. 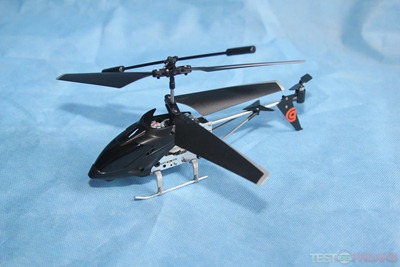 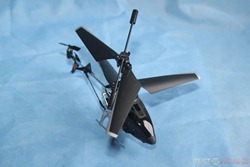 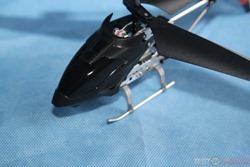 Of course something so cool looking will need some LEDs which Griffin was kind enough to add, in fact there are several of them surrounding the HELO TC.

As opposed to a standard helicopter the HELO TC has a twin rotor design with an additional bar on the top to add additional stabilization during flight. Towards the rear are two tail rotors. The landing skids are composed of plastic probably to keep the weight of the HELO TC down but this makes them prone to damage as I found out during a flight outside my home. 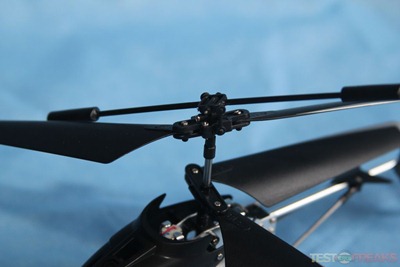 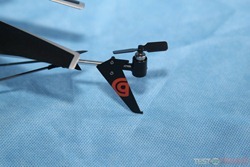 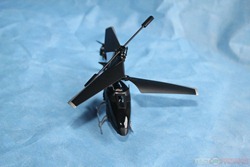 Overall for something that looks fragile the HELO TC is actually pretty solidly constructed.

The other component to the HELO TC is the Flight Deck which converts the Apple iPhone or iPod Touch into an infrared remote. The device is composed of black plastic with grey rubbery material to hold the attached Apple device. It clamps onto the iPhone or iPod Touch via two rubbery clips and connects to the headphone input via a 3.5mm jack, which emerges from the bottom of the Flight Deck. 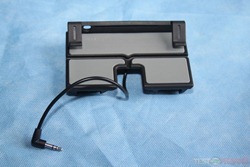 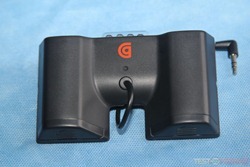 The Flight Deck requires four AAA batteries to power the IR component. On the front of this device we see the infrared emitters. 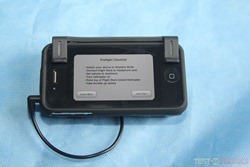 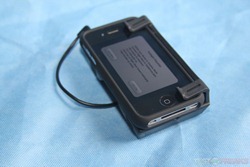 Obviously the novelty for the HELO TC is to be able to fly it using the Apple device. Using the free app in conjunction with the Flight Deck makes this happen. Before flying there are a few caveats, the iPod Touch or iPhone must be in Airplane Mode and the volume needs to be at the highest setting.

There are two settings for flying the HELO TC – Touch to Fly and Tilt to Fly. The first uses the virtual joystick in the iOS app while the latter lets the user move the copter forward, back or side to side using the accelerometer on the iPhone or iPod Touch.

Looking at the app screen we see the Lift Off (Throttle) Slider on the left, the Mode indicator, Flight Plan recorder, Settings and Auto Landing options in the middle and the virtual joystick, LED controls and Trim correction settings. 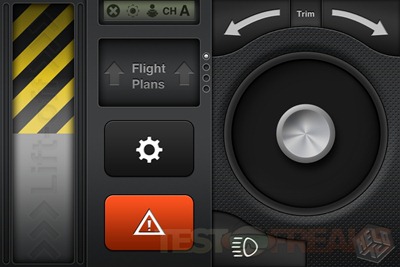 The Settings screen is where you can choose one of three channels to control the Touch to Fly and Tilt to Fly along with Invert Pitch Control, switching the throttle control right or left and then turning Expert mode on or off. The question mark icon on the top right accesses the help menu. 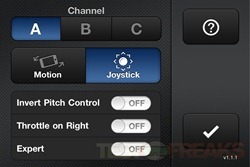 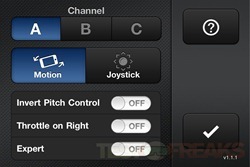 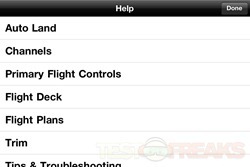 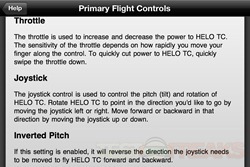 Using either flight setting you’ll still need some of the app’s controls for flying the HELO TC. My personal preference was the Touch to Fly setting as using the Tilt to Fly option led to many more crashes and failed flight attempts.

To send the HELO TC airborne slide the throttle up for the helicopter to start its ascent. I would definitely recommend staying away from the expert mode until you feel more comfortable with the controls.

Having the HELO TC elevate can be simple if the controls are in a neutral position but if there is some bias towards one direction the RC helicopter will not only rise with the throttle but move forward, backward or side to side. This bias can be adjusted using the Trim control on the right side of the iOS app control screen.

It is important to keep the Flight Deck aimed towards the HELO TC otherwise there will be lag in the control commands which invariably leads to crashes, Don’t expect to replicate the flying prowess of the videos found on the Griffin website; at least not until you’ve logged in several hours of flight time.

Overall I would say the HELO TC is an intermediate to advanced RC helicopter to fly as the unique touch controls lack tactile feedback leading the user not hitting the right control when having their eyes off the Flight Deck and on the HELO TC.

The battery life is advertised at 6-8 minutes but my flight times ranged from 8-10 minutes depending on whether the LEDs were on during flight.

Durability wise the HELO TC took many crashes in my home without issue. Many a wall, ceiling and all types of furniture force my HELO TC to come crashing down and it survived each bump no worse for wear.

It was only when test flying the HELO TC outside that the helicopter sustained structural damage. Apparently a crash from 20-30 feet down towards cement will cause the plastic landing skids to snap. Luckily some Krazy Glue put them back in place. So my take home from this is make sure you are an excellent pilot or stick to flying over grass if outdoors.

If you are looking for a neat stocking stuffer this Christmas then the HELO TC is a good option for the iOS user in your life.