Here’s another free game for you iOS users out there called Sandbox. Yes it let’s you play in a virtual sandbox just like you would in a real one. You can build castles and play with trucks and just have some fun. My kids have a sandbox and I’m sort of envious as that I really can’t play in it. Now though we all can play in a sandbox, yes it’s virtual but at least you won’t get sand in your shorts! 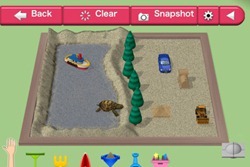 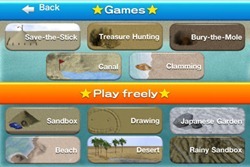 Sandbox is an iPhone/iPad app that lets kids play with sand in various ways. In free-mode, users can play around in six types of sandboxes such as a normal sandbox, beach, Japanese garden, etc. Also, the app has five mini-games, for example "Treasure Hunting" and "Bury-A-Mole". Users can save their sand-works in their iPhone as photos, and also post them in the gallery to share them with other users from all over the world! Enjoy tapping sand and water flowing super-realistically, that only Phyzios’s original physics simulation technology can make come true.