Look at that, another free game for you iOS folks. Actually I have another one after this as well!  This one is called Zombie Life and I’m going to have to get this one as it sounds rather interesting. In the game you’re a young zombie who is just trying to live a normal life by getting a job, finding friends, you know the normal stuff us people do. I like the concept, and for free why not give it as try. 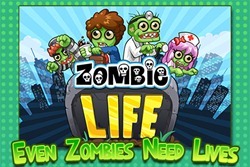 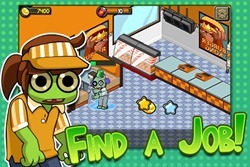 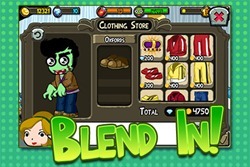 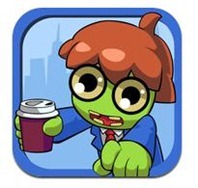 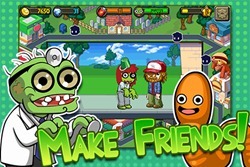 Zombie Life, the new iOS game from Industry-leading mobile games development house The Playforge, has reached the number one top free game position in US/Australia/Canada on the App Store. Released just one week ago on October 13, Zombie Life climbed the charts and is now a Top 50 grossing game in more than one dozen countries. Zombie Life is available for free on the App Store for iPad, iPhone and iPod touch. New updates are also now available, including additional in-game quests and Japanese language support.

Offering a novel take about blending in with the living, Zombie Life players take on the role of a young zombie and are challenged to live life in the real world. The game is the successor to The Playforge’s smash hit iOS game Zombie Farm. With more than 20 million downloads, Apple named Zombie Farm as the top grossing freemium iOS game of 2010. With the first week achievements of Zombie Life, The Playforge now has two games in the top 50 grossing charts in the USA.

“We hit our one millionth session in under 40 hours and served our 5 millionth session in the first weekend of Zombie Life’srelease,” said Vince McDonnell, CEO of The Playforge and designer of the game. “With more than 12,500 ratings at an average of 4.65 stars, we are in reach of our goal of making Zombie Life a five-star iOS game.”

In Zombie Life, players must learn ways to blend in with society by staying ”fresh” and disguising themselves. Energy is needed to do actions and progress throughout the game. The zombie’s mood will fluctuate: It rises with fun activities such as hanging out, biting people and getting a promotion. Conversely, it falls when they work hard or when the town discovers the zombie’s true nature.  Zombies must work to make a living and climb the corporate ladder, at places like Burger Kong or the local grocery store. But with each job, players can get promoted and better their career for a better zombie life!

The Zombie Life App is available for free from the App Store on iPad, iPhone and iPod touch or at http://itunes.apple.com/us/app/zombie-life/id419224311?ls=1&mt=8