This looks cool, but sadly it’s only for iOS devices. The new Moto TC Rally from Griffin is their latest AppPowered remote control toy and it just happens to be a rally car which works over Bluetooth and it’s controlled via an app you install on your iOS device. The price is $99.99 and I think that might be a bit high, but then again I don’t know the quality or how it works, so I’ll reserve judgment at the moment.. More info below for you.. 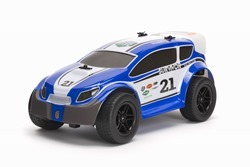 MOTO TC Rally, available now for $99.99, connects to iOS devices via Bluetooth Low Energy (BTLE v4.0) and features super quick maneuvering capabilities via proportional steering, impact sensors that detect bumps and crashes changing the way the car handles, a fully independent, shock-absorbing suspension, power rear-wheel drive, and ground effect lighting.
Drivers can race one of two ways: ‘Race the Clock’ either solo or with friends to beat their best time using the included Lap Counter; or ‘Bump ‘n Run,’ allowing drivers to dish out virtual damage and earn points for attacks on their opponent’s car. Attacks include reducing an opponent’s speed (‘Snare’), tampering with a friend’s controls (‘Randomize’), and flipping their steering wheel (‘Opposite’). The more damage a car incurs, the harder it is to drive. The app also includes bonuses to repair damage, add protective armor, and much more.
Check out Griffin’s new MOTO TC Rally in action here: http://youtu.be/3uDcmmNVMJQ