Vanquish kind of reminds me of Gears of War, but on steroids.. Now we’ve got news that Havok is doing the Physics and animation for it.

The title will be released to market on October 19 in North America, October 21 in Japan and October 22 in Europe.

VANQUISH(TM) is set in the near future and features Russia and the United States vying for ownership of the world’s fast-depleting energy resources. The US has constructed a space station in order to harness energy from the sun. Russian forces capture this space station and divert its harvested solar energy into a blast wave that destroys San Francisco, aiming to force the US into a total and unconditional surrender. In response, the US tasks its armed forces with recapturing the space station before the Russians can annihilate their next target – New York. 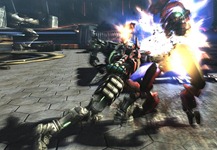 From epic battle scenes to its signature time distorted "Augmented Reaction", Havok Physics and Havok Animation technologies are used throughout.

"Directed by Shinji Mikami and produced by Atsushi Inaba, VANQUISH is one of the most anticipated game titles of 2010 worldwide and we are thrilled to be a part of it. Our dedicated Japanese Support Team worked closely with the PlatinumGames team to help them make the best use of Havok’s Physics and Animation technologies and deliver a fast, frenetic, intense and impressive gaming experience."

"Our vision was to create action on a scale that was unlike anything that has come before. With Havok’s proven technology, our development team in Japan was able to create the exciting and dynamic world in VANQUISH(TM). Using Havok we were able to scale the interaction up to unprecedented levels and push gaming consoles right to their limits."

Havok, which has offices in Dublin, Tokyo and San Francisco, is the leading provider of interactive software and services to the global game and movie industries. The company has a portfolio of six cutting edge products which help game developers and digital animators make the visual effects in games and movies more realistic and interactive than ever before.