Lian Li has just announced that the new PC-D600 double wide chassis is coming to North America on October 20th with an MSRP of $349. The case has two compartments so you can separate your components and really show off your system through the side panel window. The idea is to move things out of the way like cabling and the power supply and only have the motherboard basically showing through the window, and I think it’s an intriguing idea.. Some pictures below for you along with more info.. 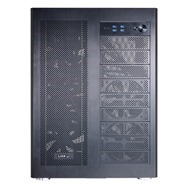 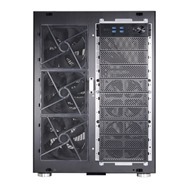 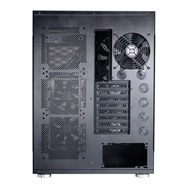 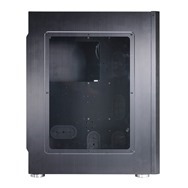 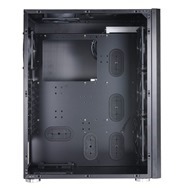 Separating the internal components into two compartments, the PC-D600 allows DIY enthusiasts to show off high end and intricate setups through the side panel window, while giving plenty of room for the wires and less eye-catching components on the other side of the motherboard tray.

Not only does the two compartment design allow enthusiasts to show off their builds, it also allows uninterrupted airflow across the heat generating components.

Even with a radiator installed on the right side of the chassis, a large space above the motherboard tray allows the CPU cooler, cables, or radiator to be effortlessly moved between the compartments.

The PC-D600 has many tool-less features allowing for simple setups and installations as well as easy breakdown for modability. This fully aluminum case features pop-off side panels and front bezel, tool-less mounting for hard drives as well as clip-in dust filters.

The entire HDD rack on the right side of the case can be pulled out of the case with the removal of a couple of thumbscrews. The three HDD cages inside the HDD rack are also tool-lessly removable and have 120mm fans mounted to them. These cages can be set up so that the fans are either towards the front of the case or behind the cage.

Clamps on the reverse side of the motherboard tray can be adjusted and positioned for optimal cable management setups.

The PC-D600 will be available after October 20 for the suggested retail price of US $349.