Another game deal for you, the recently released Nano Assault for 3DS has gone on sale for $19.99. The game has gotten very good reviews overall and I think it might be worth grabbing especially at this price now. Nano Assault is a 3D shooter in which you’re fighting a virus to stop it from contaminating all of civilization. 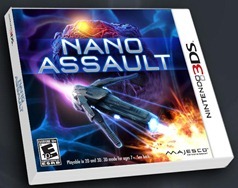 Nano Assault, the visually-stunning 3D shoot’em up game based in a cellular world that tasks players to stop the deadly Nanostray virus from spreading and contaminating all of human civilization, has lowered its price to $19.99! Nano Assault has received rave reviews and now’s your chance to get a great game with great graphics at a great price!

“Once I started playing, I couldn’t stop until it was completed, which says all you need to know about how fun the game is…” –VGChartz

Nano Assault enables players to shoot their way through 32 twisted cell stages and dark worlds filled with rugged landscapes that adjust in difficulty based upon the player’s skill level. Take on and defeat extreme nemeses including the Black Nucleus, Hyper Blobs and Spore Plants using powerful beams, energetic bombs and other unlockable assault weapons.

Don’t miss out on this steal of a deal for a game that GamerLive TV called “…a 3DS game that deserves to be a sleeper hit, thanks to its solid shooting mechanics and eye-boggling visuals.” Developed by Shin’en Multimedia, Nano Assault is rated E10+ and available in retailers everywhere for $19.99. To watch the trailer or to get more information on the game, please visit www.nanoassaultgame.com.