PURCHASE, N.Y., June 8 /PRNewswire-FirstCall/ — This summer in the United States, PepsiCo’s Mtn Dew is offering two limited edition line extensions inspired by Blizzard Entertainment(R)’s World of Warcraft(R), the most popular subscription-based multiplayer online role-playing game in the world. Mtn Dew Game Fuel is available in two varieties that represent the opposing factions of the game: citrus-cherry-flavored Horde Red and wild fruit-flavored Alliance Blue. The packaging for each product features images of the iconic characters that symbolize each faction. 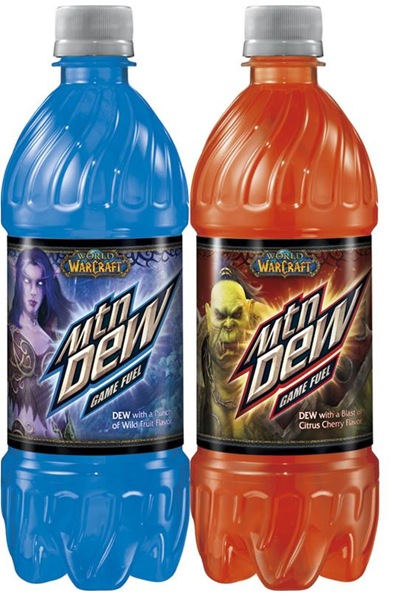 To celebrate the launch of the two beverages, Mtn Dew, working in partnership with Blizzard Entertainment, is offering World of Warcraft players an in-game pet, known as a "battle-bot," available exclusively through the promotional Web site www.warcraft.com/Dew. This site also offers an extended 14-day free downloadable trial of the game. Throughout the summer, visitors also have the chance to win great gaming related prizes every 15 minutes for 84 days with Mtn Dew Game Fuel’s "Choose Your Side" promotion, resulting in 96 giveaways per day — a grand total of over 8,000 prizes. Among the prizes are Alienware Notebook computers and Razer Gaming Peripherals, such as headphones, speakers and keyboards, as well as Mtn Dew Game Fuel/ World of Warcraft branded gear and apparel.

"We are thrilled to be collaborating with Blizzard Entertainment to harness the power of one of the most popular and recognizable game franchises," said Frank Cooper, chief marketing officer of sparkling beverages, Pepsi-Cola North America Beverages. "We’re giving players a new way to experience World of Warcraft and a new way to experience Dew. Both of us, and more importantly, the consumers, will benefit from the partnership."

"We’re pleased to be working closely with Mtn Dew to bring this opportunity both to our own community and to the broader gaming audience as a whole," said Paul Sams, chief operating officer of Blizzard Entertainment. "In addition to putting thousands of great prizes up for grabs, this promotion offers World of Warcraft players a new way to show their Horde or Alliance pride out in the real world."

Mtn Dew Game Fuel is the latest in a series of the brand’s gaming programs. Most recently, DEW(R) launched DEWmocracy, an online game experience that allowed consumers to create the next Mtn Dew flavor – Mtn Dew Voltage. In 2007, consumers experienced the first Mtn Dew Game Fuel, a limited-time-only product and the first beverage created specifically for gamers, which was inspired by Microsoft’s launch of Halo 3 for XBOX 360. The highly successful XBOX 360 "Every 10 Minutes" promotion in 2005 provided DEW consumers with the opportunity to win the console before it was available for sale. In addition, as an ongoing sponsor of Spike TV’s Video Game Awards, Mtn Dew has helped to highlight the work of emerging and independent video game developers.

Mtn Dew Game Fuel will be available in 20-ounce single serve bottles and 12-packs of 12-ounce cans from June through the summer. A full slate of advertising will support the product’s launch with TV and radio spots created by BBDO NY and digital from Tribal DDB.

Best known for blockbuster hits including World of Warcraft(R) and the Warcraft(R), StarCraft(R), and Diablo(R) series, Blizzard Entertainment, Inc. (www.blizzard.com), a division of Activision Blizzard (NASDAQ:ATVI) , is a premier developer and publisher of entertainment software renowned for creating some of the industry’s most critically acclaimed games. Blizzard Entertainment’s track record includes eleven #1-selling games and multiple Game of the Year awards. The company’s online-gaming service, Battle.net(R), is one of the largest in the world, with millions of active users.