I love my NAS boxes…  the new model from Qnap is rack mounted, has four HDD bays that can support either 2.5” or 3.5” and it’s got an Intel Atom 1.6GHZ CPU along with 1gig DDR2 memory..

New Models Feature up to 8TB capacity, Intel ® ATOM 1.6 GHz CPU and 1 GB DDRII System Memory in a 1U Rack Mounted Chassis with Optional Redundant Power Supply and a Host of High Performance 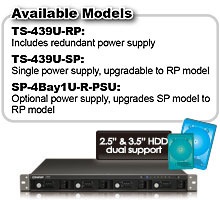 The TS-439U-RP and TS-439U-SP are fully compatible with Windows, Macintosh, Linux, and UNIX networks and feature business-essential features such as AES 256-bit volume-based encryption, policy-based IP blocking, secure FTP, encrypted remote replication for backing up the NAS server to another NAS server over the network, email or SMS alerts if drives in the NAS server fail or are about to fail, and much more.

The TS-439U-RP and TS-439U-SP come standard with QNAP’s new V3 of its NAS management software, embedded as firmware, adding significant new features including virtual disk drives support (up to 8 virtual disks via iSCSI expansion over the network), exclusive QNAP RAID Recovery that can recover an inactive RAID 1, 5, or 6 due to unintentional removal of drives. Network Discovery Services are enhanced with new Bonjour support offering zero-configuration networking for HTTP, SAMBA, FTP, AFP, and SSH based networks, and full UPnP support. Other new features of the V3 firmware include EXT4 support for very large volumes and file sizes, SNMP support, and bitmap support for faster rebuilding of RAID volume after a crash or adding/removing a drive. Version 3 includes an all-new AJAX-based web interface that is extremely easy to use and is broadly compatible with popular web browsers.

About QNAP Systems, Inc.
QNAP Systems, Inc. is a privately held company founded in 2004 and is dedicated to bringing world class NAS storage, professional NVR video surveillance, and network video players to consumer, small/medium business, and entry level enterprise market segments. QNAP leverages not only hardware design but also a growing core competency in software engineering that is precisely focused on bringing to market products that offer the highest available performance coupled with outstanding reliability, scalability, and ease of installation and use. QNAP is a multi-national company with headquarters in Taipei, Taiwan, and subsidiary offices in China and the United States.