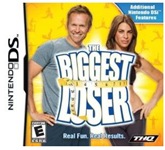 THQ Inc. today announced that The Biggest Loser interactive health and fitness video game is now available at retail outlets throughout North America exclusively for Wii™ and Nintendo DSi™/Nintendo DS™. The game will also be made available in the UK and Australia over the coming months. Offering more than 90 exercises and featuring the expertise of trainer Bob Harper, as well as Jillian Michaels, from the hit NBC television show, The Biggest Loser video game is rated E for everyone and is available for the suggested retail prices of $39.99 on Wii and $29.99 on Nintendo DSi/DS.

“The Biggest Loser interactive fitness game takes the same successful formula of The Biggest Loser television show and applies it to the virtual world,” said Nicole Armstrong, divisional vice president, marketing for THQ Kids, Family and Casual Games. “Players are led through a wide range of workouts and given proper nutritional tips to help them safely change their lives through diet and exercise.”

“In a perfect world, we wouldn’t have to turn away applicants from The Biggest Loser TV show,” said Bob Harper, The Biggest Loser trainer. “Now that The Biggest Loser interactive fitness game is available, a wider audience can be reached and anyone who has the game can get access to the show’s expert health advice and body-changing workouts to reach their personal fitness goals.”

“Having The Biggest Loser game is like having your own personal trainer in your living room,” said Mark Koops, Managing Director at Reveille, the production company behind The Biggest Loser. “Players are able to customize their routines and determine their intensity level, while their trainer gives them feedback in real-time.”

About The Biggest Loser Video Game

The Biggest Loser interactive fitness game is a fun and engaging way for players to get in shape and maintain their ideal fitness level. Set at The Biggest Loser ranch, players can take The Biggest Loser challenge and compete in 4, 8 or 12 week programs against former contestants from the television show, or work out with a friend to form a support system to see who really is The Biggest Loser. Players will work out to a series of structured routines with special weekly challenges, weigh-ins and eliminations, or they can even create their own workout routines. Workouts include upper and lower body exercises, as well as core, cardio and yoga exercises. Progress is documented on a calendar that keeps track of in-game achievements, upcoming training and weigh-in dates. Players can also input exercise done while not playing the video game, such as going for a walk or a bike ride.

The interactive fitness game also features 50 healthy recipes from The New York Times best-selling book series The Biggest Loser to help users learn how to eat right for optimal weight loss. Throughout the Wii workout program, suggestions and tips from contestants and trainers will also help guide players as they transform their lives via diet and exercise. The video game also features an interactive calorie counter that tracks what players are eating and recommends their daily intake based on individual height and weight and fitness goals.

When paired together, the Wii and Nintendo DSi/DS products become powerful training partners with Nintendo DSi/DS serving as a portable tool. Featuring nutritional information on thousands of foods, including menu items from some of today’s most popular restaurants, users can count their calories and even get healthy recipe suggestions on the go. Players can take their ‘trainer’ with them for food and fitness tips, as well as complete exercise routines that encourage them to stick to their wellness goals no matter where they are. To find out more information on The Biggest Loser interactive fitness game, go to www.biggestloserthegame.com.

About The Biggest Loser

The first reality series where everybody "loses," The Biggest Loser challenges and encourages overweight contestants to shed pounds in a safe and recommended manner through comprehensive diet and exercise as they compete for a grand prize of $250,000. Hosted by Alison Sweeney (Days of our Lives), the series provides the contestants with challenges, temptations, weigh-ins and eliminations until the final contestant remains to claim the title of "the biggest loser." Each team works out under the supervision of professional trainers Jillian Michaels and Bob Harper. The Biggest Loser is a production of Reveille LLC, 25/7 Productions and 3 Ball Productions. “The Biggest Loser” airs Tuesdays at 8:00 p.m. ET/PT on NBC.

Beyond the U.S. where more than 100 episodes of the show have aired, The Biggest Loser has become a worldwide hit appearing in over 90 countries and produced in 25 countries. Since its debut in 2004, The Biggest Loser has grown to become a standalone health and lifestyle brand by developing tools and products inspired by the show and approved by its doctors and experts. Anchored by the online, subscription-based extension of the show, Biggestloserclub.com, The Biggest Loser Meal Plan, The New York Times best-selling books series, best-selling fitness DVD series, a line of appliances, fitness equipment, protein supplements and countless other health and lifestyle based products, The Biggest Loser consumer products program has generated over $50 million in spending with a presence at more than 25,000 major retailers to date. The Biggest Loser was recognized as a top brand of the year in Advertising Age’s 2008 Marketing 50. Check out www.biggestloser.com for more information.

Reveille is a leading independent television studio with a major presence in scripted and unscripted television and digital entertainment, and a world leader in creating integrated marketing opportunities for advertisers. Reveille’s scripted entertainment programming includes “The Office” and “Kath and Kim” (NBC), “Ugly Betty” (ABC) and “The Tudors” (Showtime). The company’s roster of highly successful reality programming includes “The Biggest Loser”, “American Gladiators”, and “Nashville Star” (NBC), “30 Days” (FX), “Parental Control” (MTV) and many more. Through its distribution arm, ShineReveille International, Reveille distributes its extensive library of high-quality programming, along with a broad array of programming acquired from independent producers and U.S. networks, to more than 150 countries. Reveille is part of the Shine Group, one of the world’s foremost multinational entertainment and drama companies. The Shine Group also includes UK independent producers Kudos, Princess, Dragonfly and Shine TV.

THQ Inc. (NASDAQ: THQI) is a leading worldwide developer and publisher of interactive entertainment software. The company develops its products for all popular game systems, personal computers and wireless devices. Headquartered in Los Angeles County, California, THQ sells product through its global network of offices located throughout North America, Europe and Asia Pacific. More information about THQ and its products may be found at www.thq.com. THQ and the THQ logo are trademarks and/or registered trademarks of THQ Inc.