Mike Tyson is still around? Wow, I thought he was retired on some island somewhere contemplating life or something like that.

RockLive (formerly Rock Software), creator of mobile applications and games built around celebrity individuals or famous entities, today announced the availability of " Mike Tyson – Main Event," an interactive boxing game featuring Mike Tyson and an eclectic group of fighters from around the world. Available now and free in the iTunes App Store, Mike Tyson – Main Event lets players punch their way through multiple rounds as the underdog in a pound-for-pound boxing competition en route to the ‘main event,’ – boxing against the former undisputed heavy weight champion of the world, Mike Tyson. 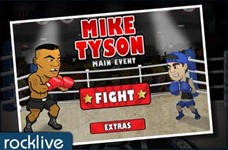 "The goal with all of our applications and games is to excite users by offering them a unique and entertaining way to connect with their favorite athletes, celebrities and personalities in a relevant and lasting way," said John Shahidi, CEO of RockLive. "Mike Tyson is an international icon in the boxing world and beyond; therefore it’s only natural for RockLive to work with Mike to further connect with his fans – young and old alike."

Mike Tyson – Main Event features fictional fighters Jordy McDirt, Fluke O’Brady, Jay Shore Tenerelli, and other skilled, trash-talking opponents who dodge left and swing right while advancing from one circuit to another. Players earn RockCash after each win that can be used toward the purchase of virtual items to help defeat future opponents.

"We’ve got a lot of surprise updates in store with this game," said Mike Tyson. "It’s going to be a knockout!"

The game is free to download and available now in the iTunes App Store. Are your thumbs ready? Watch the training video to find out.