It seems a great game just got a lot better with the upcoming release of L.A. Noire The Complete Edition for both Xbox 360 and the PS3. it will be arriving on November 15th and it will include all of the DLCs ready for you to play. Price will be $49.99 and you’ll be able to get it on November 15th just like the title up there says! 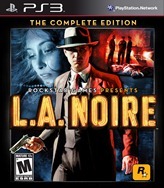 Similar to its PC counterpart, L.A. Noire: The Complete Edition on consoles will feature all of the previously released downloadable content for L.A. Noire, including the “Nicholson Electroplating” Arson case, “Reefer Madness” Vice case, “The Consul’s Car” Traffic case, “The Naked City” Vice case , “A Slip of the Tongue” Traffic case, The Badge Pursuit Challenge, and all weapons and outfits released to date.