Now this looks like a fun game for me and my kids. In Saving Yello you have to help save Yello the goldfish from his 7 yr old owner who likes to take him out of his bowl to paly with him?! I’m not sure about the taking him our of his bowl thing, but the graphics are decent and the game looks like a lot of fun to me. The Lite version is free of course but you can get the version for only 99 cents. 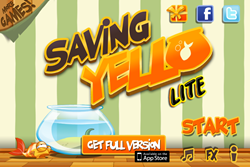 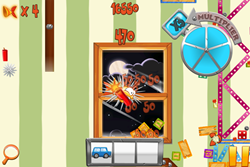 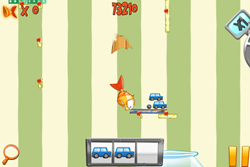 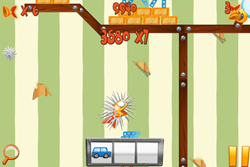 Saving Yello Lite gives potential Yello saviors who might not want to stay out of the water too long a taste of their rescue mission. It will include a selection of 10 levels from the Play Room, the first area, free of charge!

Haven’t saved Yello yet? Want to see how explosions, pins, and dynamite can save a fish? View the official trailer here: www.youtube.com/watch?v=w7-mW0XQNrg

Yello is a hapless goldfish at the mercy of his mischievous 7-year-old owner, Mathilda, who loves to play with him. Unfortunately for Yello, this means taking him out of his beloved fish bowl. Saving Yello and bringing him back to his bowl is the main quest, but players will soon learn that for every one of Mathilda’s toy destroyed along the way, they collect points. Different obstacles and toys also prove to be vulnerable to different power-ups. Now it’s starting to smell like revenge!

Combining power-ups the right way and the quest of getting Yello back to his bowl safely will quickly turn into a brain-teasing highscore chase.Saving Yello is a universal app available now on the iTunes App Store for the iPhone™, iPod™ touch, and iPad™ for $0.99. Get it here:http://itunes.apple.com/us/app/saving-yello/id465065038?&mt=8