Two days ago I posted about the new promotion from Sprint where they’re offering to ‘cut your bill in half’ and I mentioned in there that I thought there would be a catch somewhere and of course there is. Apparently the average customer who switches to Sprint using this new deal will only save about 20% in reality and that’s because they’re not including the cost of the new phone you have to get through them and their ‘special’ leasing plans. you could of course just pay for a phone outright but that would even make the overall cost higher I would think. 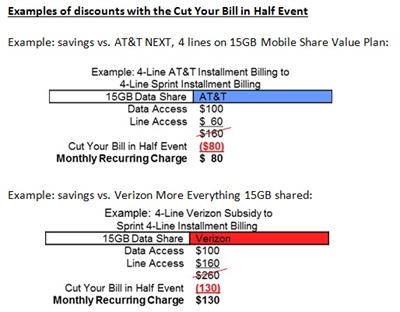 On the surface and looking at Sprints special math it does look like a great deal, but like most things though, if it sounds too good to be true then it probably is, and that very much applies here.

I’m tired of trick marketing really, I wish companies would just be honest for once  and not try to pull things over on consumers really. I have to wonder how many people actually just jumped on this deal without actually thinking it through or doing any kind of research into it?

There’s an old Dudley Moore movie called Crazy People and it’s one of my favorites and the premise is,very basically, that an advertising exec tries something different and that is actual truth in advertising and it works. Yes it’s obviously a fantasy movie, it’s a comedy actually, you get the point, but it would be nice if companies would just be honest when it comes to marketing.