The research and development spending list has apparently come out and Microsoft was ranked  4th in the world at 10.4 billion dollars  in spending. Volkswagen was number one at $13.5 billion which I thought was odd, and Samsung and Intel were ranked second and third. The list aside though I have to wonder what is Microsoft doing with all that R&D money as we’re not really seeing stuff from them in terms of consumers goods anyway. Where is all the money going and to what project? Microsoft has always been a leader, at least in my opinion, they’ve been first with most products out there but they still lag behind in actual sales and consumer reach. Apple is way better at marketing, that’s one of the big reasons their products are so popular, I think it might be a good idea if Microsoft took some of that 10.4 billion dollars and put it towards marketing ort maybe do some research into better marketing. The funny thing about this R&D list I think is that Apple isn’t even on it.

Here’s the chart if  you want to see it: 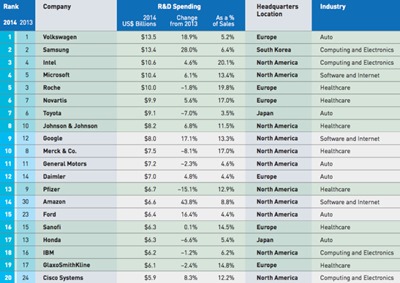