Hmm, first up we had the announcement of the Angry Birds table top game, now we’ve got Tetris.

-The Tetris® brand is the most recognized casual gaming brand in the world. Today, toy innovator Techno Source and Blue Planet Software, Inc., the company that manages the exclusive licensing rights to the Tetris brand, announced they have partnered to launch Tetris® Link™, a tabletop game with multiple layers of strategic game play for the whole family. 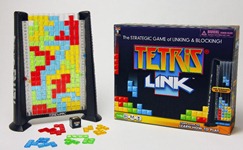 “We are thrilled to be partnering with the Tetris brand to offer a new tabletop strategy game that can be enjoyed by the entire family. If you love playing the Tetris video game, you will love this new strategy game!”

In the Tetris Link game, players battle to score the most points by linking colored Tetriminos, the iconic Tetris playing pieces, into an upright game tower while attempting to block competitors from linking their game pieces. The game will make its debut at the American International Toy Fair in New York City February 13-16, 2011 (booth #3151) and will be available for purchase at mass market and specialty retailers in spring of 2011.

“Tetris is one of the most recognized, most played, and most loved games in the world,” says Eric Levin, president, Techno Source. “We are thrilled to be partnering with the Tetris brand to offer a new tabletop strategy game that can be enjoyed by the entire family. If you love playing the Tetris video game, you will love this new strategy game!”

“Techno Source is a true game trendsetter, so we’re excited to be partnering with them to create a new spin-off game that incorporates core Tetris brand elements that we know our fans will love,” says Henk Rogers, president and CEO, Blue Planet Software, Inc. “Tetris Link is an exciting extension to the Tetris brand and we know our fans won’t be able to stop playing it!”

The Tetris Link game is a strategy game that takes just minutes to learn and that the whole family can play together. Each player begins by choosing a color and collecting all of the Tetriminos in that color. Players then take turns rolling the die and dropping their color Tetriminos into the game tower, attempting to link Tetriminos of the same color to earn points while blocking opponents from scoring. Earn three points for the first three Tetriminos linked, and score one point for each additional Tetrimino linked. But, be careful! Players can lose points for any holes that are left in the game tower. Players track their points in real-time with the built-in scoring markers and, when the tower is full, the player with the highest score wins the game! Average play time is 15-20 minutes – play just once, or again and again. The retail game includes the game tower, 100 Tetrimino playing pieces in four different colors, playing die and instructions. For 2 to 4 players. Appropriate for players ages 6 and up. MSRP: $19.99.

Created in 1984 by Russian-born mathematician Alexey Pajitnov, the Tetris game revolutionized puzzle games with its distinctive “falling” blocks, called Tetriminos, that players could arrange in real time along the bottom of the rectangular playing field, or “matrix,” in order to clear lines. Since then, the game has been translated into more than 50 languages and it is played in more than 50 countries worldwide. The game has been developed for more than 30 different gaming platforms with hundreds of millions of units sold.

For the latest information about the Tetris brand and Tetris products, please visit www.tetris.com.