I never heard of Tevci, and apparently they are a new company out of Nigeria of all places. Besides that though, their new Android tablet called the DroidPad has some decent specs like for one it’s a7”  1024×600 capacitive touch screen with a 1Ghz Cortex A8 CPU and it has 8gigs of ram onboard. There’s also dual cameras, wi-fi, Bluetooth and 3G connectivity. There’s no price listed, but available for two versions is listed for may 2011.

The upcoming device is powered by a 1GHz Cortex A8 processor and supports various types of connectivity options such as Bluetooth, 3G, GPS/AGPS, and WiFi. This Multi-touch screen device has 512 MB of internal memory, 8G NAND Flash memory which can be increased up to 32 GB through microSD memory card slot and comes with built-in GSM antenna. It comes with impressive features such as 7-inch capacitive touchscreen display with resolution of 1024 x 600 pixel, 3 megapixel photo camera, VGA front-facing camera for video calling. It also has the ability to make and receive phone calls and video call functions. 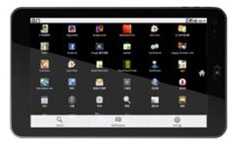