I don’t know about these gloves but I own a pair of capacitive gloves that I happened to get from our friends at Mobile Fun and I love them. It’s cold out now and I’m using them, they allow me to use the touchscreen on my phone and keep my hands warm at the same time. The new Echo Touch gloves from Echo Design are similar to the ones I have but they were created with something called eLink fabric making them capacitive basically. The ones I have have three fingers on each hand that are capacitive, but it looks as though these only have two fingers on each hand. These Echo Touch ones are also a bit more expensive as well, but there’s plenty of styles to choose from. 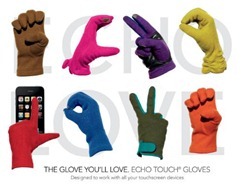 While the song dubs the season "the most wonderful time of the year," for many it is the most stressful.  Each year frantic shoppers hit the streets, turning department stores into battlefields and leaving even the most seasoned shoppers feeling overwhelmed. But savvy consumers know that the item topping holiday gift lists this season is a pair of Echo Touch® gloves, created by the well known accessories company, Echo Design. These gloves are available at top retailers and at echodesign.com.

Fashion meets function with Echo Touch® gloves. Created with eLink™ fabric, these gloves are compatible with the iPod, iPhone, iPad and other touchscreen devices. The idea came to the company after top executives fielded complaints from their friends, co-workers and children or experienced the problem of attempting to text, email or answer calls in the cold.

Greeted with unparalleled success, the Echo Touch® glove has been one of the 88 year-old company’s top sellers. The collection includes gloves for men, women and children in wool, leather and cashmere and is available in an extensive range of colors, from brights to neutrals.

Isn’t winter grey enough? Let Echo brighten up this holiday season with colorful Echo Touch® gloves that will keep you warm and in touch with family and friends, the perfect gift for anyone on your list.