So here’s some more new for you TV viewing pleasure. I just mentioned about Verizon FIOS coming to the Xbox 360 but there’s another announcement from Microsoft with a list of all the channels that you’ll ahev access to on your Xbox 360 come this holiday season. I guess I could have combined the two together, but I didn’t see this one until after. So read on to see the entire list of what you can look forward to… 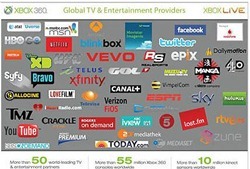 Xbox 360 brings all your entertainment, friends and family together in one place. Now, easily switch from playing your favorite game with a friend out of state or even across the world to watching your favorite TV show with your family members on the same couch, all through Xbox LIVE. Ready to mix things up? Effortlessly switch from games to music to live TV and more, simply by telling your Xbox what you want to experience.

This holiday, Verizon will bring a selection of popular live TV channels to Xbox 360 and will be a leader in delivering live, multichannel streaming HD TV, integrated with Kinect, via Xbox.

Xbox 360 is the first console to offer access to the world’s greatest TV properties, including BBC, Channel 4, Channel 5 and LOVEFiLM in the U.K.; Antena 3, RTVE and Telefonica in Spain; Televisa in Mexico; and Bravo, Comcast’s Xfinity On Demand service, Crackle, EPIX, Syfy, TMZ, "The Today Show," UFC, Verizon FiOS and HBO GO in the United States.

These new TV and video providers announced today join our existing lineup of great TV and video entertainment partners already on Xbox 360 — AT&T, Netflix and Hulu+ in the U.S., TELUS in Canada, BSkyB in the U.K., Canal+ in France, Vodafone Portugal, VimpelCom in Russia, and FOXTEL inAustralia.

Sports aren’t just a game on Xbox 360. With live and on-demand content from ESPN in the U.S., UFC in the U.S. and Canada, GolTV in Spain and Maple Leaf Sports & Entertainment/Real Sports in Canada, Xbox 360 completely changes how sports fans experience and interact with their favorite pastimes. The all-new ESPN on Xbox LIVE features thousands of live events and video highlights with enhanced personalization features, split-screen viewing and an updated interface content guide that makes it easy for fans to find the highlights from the teams and sports they care most about. UFC on Xbox LIVE gives fans access to live pre-event videos, a catalog of on-demand video, an Interactive Fight Card and pay-per-view events in stunning HD all together in one place. The energy of the Octagon is coming right into the living room.

In addition to adding the world’s largest TV providers and the best names in sports, the biggest names in Web video, news and music are also coming to Xbox 360, including AlloCine, Dailymotion, iHeartRadio, MSN with MSNBC.com, "The Today Show," TMZ, VEVO and YouTube. Whether catching up on the Web’s latest viral videos, watching breaking news, sports and weather, listening to your favorite music, or sitting down to enjoy your favorite games, movies or TV shows — no other entertainment device brings it all together in one place like Xbox 360.