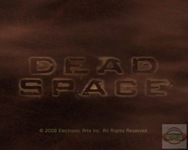 Sci-fi, Horror and Gaming, that’s a combination you can’t go wrong with… at least for me, I love all three, and when you combine them I’m in heaven! Dead Space combines all three of these to form an excellent and exciting game that will keep you enthralled for quite some time.

Dead Space redefines the survival horror genre with a storyline that is full of suspense, intrigue and surprises. Gameplay is well done, though I don’t particularly care for the third-person view, I would have rather had first person, but it works well for this game. Graphics are spectacular overall, very nicely done and fairly realistic as well. Dead Space wasn’t exactly what I would call scary, but it is a gory and hellish bloodfest of carnage and death that will make any horror fan ecstatic with glee.

I think Dead Space would have been a bit more scary had it been done from the first person perspective because with the third person view you really can see what’s coming so there aren’t many real surprises to scare you. I did find myself lost in gameplay though, so it’s very engrossing, I would start playing and the next thing I knew a couple hours had gone by without me even noticing it, but only a couple hours at a time is all I could stand  as it’s a bit repetitive with the tasks that you’re ordered to do.

If you’re a fan of b-movie horror, sci-fi and gaming then I can highly recommend you grabbing Dead Space for your collection.

So continue on for my impressions, a couple short movies, a boat load of screenshots and see how it performed on my Diamond HD 4870 1Gig video card.

So, here’s the box shots: 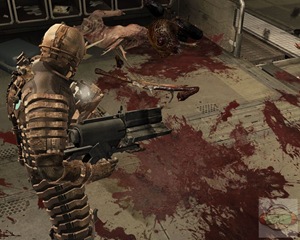 The actual story seems like it should be interesting but once you get started you realize that it sounds a bit familiar and fairly unoriginal, it seems like they grabbed a few different ideas from movies and threw them together to come up with the story behind Dead Space. While it does seem a bit re-hashed it is an intriguing storyline, and yeah it’s familiar but it makes for a good background story for a game, and might make for a good movie as well.

The whole Isaac trying to find his girlfriend thing is there in the background, but you just don’t ‘feel’ it, it’s like it’s this objective in the back of his mind that he’ll get to eventually. In the beginning you get the idea that the two are in love etc, but that’s about as far as it goes really. Personally if I was on that ship and I just found out what happened there, I think I would have finding her my first priority, or at least a bit higher on the list than it seems to be.

If you put the cheesy storyline aside, you’ve got a decent game that offers quite a bit in the way of fun, but it’s only fun to a point as it can get rather repetitive with the old ‘do this,then do this, then do this, then now wait this happened so you’ll have to do this first before you do that, etc,etc,etc’ routine that just gets annoying. The whole game you’re being told what to do by the captain and whoever she is, but they don’t do anything to help the situation, they always seem to be stuck somewhere and can’t do this or do that. I mean they’re on a ship full of monsters in deep space with a very slim chance of living and really all they can do is give orders to Isaac, you’d think they might want to take more of an active role in getting off the ship, but no…

Dead Space might have been more fun had it been first person and had it be more of a free roam type of game, frankly, I’m getting tired of the keep moving forward type of games where you do this and do that to accomplish your goal, then rinse and repeat over and over again.

During the game you’ll find stores to buy things you’ll need like oxygen, medkits, and of course ammo and weapons. The interesting thing about the store and it’s contents is that you need to find the schematics first, take them back to the store, then the item is available to buy. It’s just basically an unlock, I would have liked to have just been able to find the weapons as you’re playing, but that’s the system. If you think about it though, you’re on a ship, that’s been ravaged by essentially an alien life form and there’s no weapons lying around, but you can find ammo all over the place for these weapons. Seriously though it’s like no one fought the aliens with weapons, you’d think in such a battlefield you’d find weapons lying around, I’m guessing it’s a smart alien life form that gathered up and hid all of the weapons, but yet wasn’t smart enough to hide the ammo or destroy the stores where you buy the weapons… and about the weapons, there’s only one real weapon, a machine gun type pulse rifle, the other ‘weapons’ are re-purposed tools, like a futuristic circular saw that can shoot spinning blades out or you can magnetically control the blade to slice through monsters at a distance.

You also have a suit, that’s a combination battle and maintenance suit, as you find out at the beginning Isaac is just basically a repairman/engineer/hacker, he’s apparently you’re go to guy when there’s problem be it a computer or alien virus or a hull breech. On  the back of the suit is what looks like a glowing spine, but it’s actually your health bar, and there’s also a stasis gauge as well. 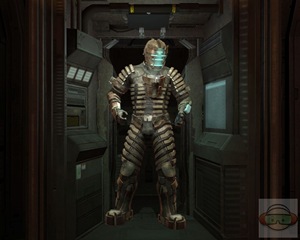 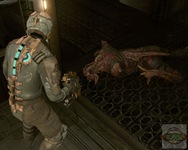 You can upgrade your suit and weapons with work benches you’ll comes across, it’s supposedly nano-technology that allows you to alter the circuitry of said items to increase their capacity, damage etc. You need to collect power nodes though to do this, and you’ll usually find them in boxes stuck on the walls.

You also have the power of Stasis, which just slows things down, something we’ve seen in other games often lately. There are certain parts of the game where you have to use stasis to get through, like a malfunctioning door that’s opening and closing fast, you use stasis to slow it down to get through. You can also use stasis on enemies, it comes in handy when a bunch come at you all at once. You can hit them with stasis and then just pick off their limbs and watch the blood spray.

You also have telekinesis, or just Kinesis as the game calls it, that allows you to move things, which can also come in handy when fighting as you can pick up things and throw at your enemies. What I can’t figure out is why can’t Isaac use his hands to flip switches, he has to use Kinesis to do it…dunno

As for graphics performance, my Diamond Radeon HD 4870 1gig handled it fairly well even with the settings on high, though there were slowdowns at some points. One thing different about Dead Space is that there are no levels to adjust AntiAliasing, it’s either on or off, turning it off did lead to a performance gain and not much noticeable difference in the graphics, unless you really look closely. Turning off antialiasing did get the minimum framerate over the magical 30, so it’s well worth it to do this.

I used FRAPS to get the Min, Max and Average Frame rates, since the game isn’t exactly the same each time, I ran though the same level  three times on each setting and averaged out the results. The average frame rates really don’t change much at all, but the minimum and max change when disabling antialiasing. 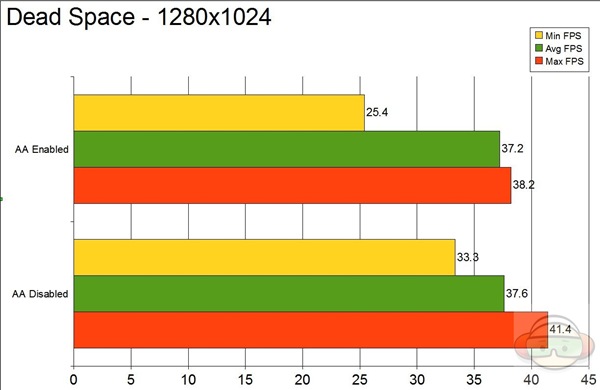 Conclusion:
Dead Space is the kind of game you’re going to either love or hate, and while it might seem I was a bit hard on it, I do like it quite a bit, but I also like b horror movies as well, and most anything sci-fi, so it works well for me. It is a bit over the top at times with the blood and gore but that’s part of it’s charm, and that’s also the part some people might not like.

If you’re a fan of sci-fi and horror then pick it up and have some fun, you can easily spend over 12 hours playing it. Once you complete it you’ll unlock  the Military Suit, Backstory, 50000 credits, 10 Power Nodes and Impossible Mode and then start all over again.

I’d like to see a sequel to Dead Space as there is potential with the whole premise, but it would have to be done a bit better than this was to make it worth buying.

Cons:
Third person takes a bit to get accustomed to
No character development, re-hashed, thrown together storyline
Need a good video card to really enjoy graphics