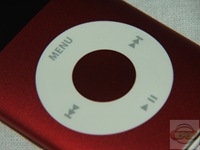 So, believe it or not I’ve never owned an iPod, you’d think being into technology as much as I am I’d have at least one, but nope, not until now. Since I’ve had the iPod, I’ve had quite a bit of time to play with it, and well, I’m not that impressed with it really, not sure I understand all of the hype around it, and why it’s so wildly popular. Mp3 players have been around for a long time, but now it seems ‘iPod’ has become a generic term for mp3 player, you mention mp3 players and people think of iPods instantly, it’s like there was never anything before the iPod…  I own two mp3 players that I don’t even use anymore, instead I use my ATT Tilt which can do everything the iPod or my mp3 players can do and much more…

Today I’ve got the 4th Generation  Apple iPod nano, the 8gb version, in the limited edition color Product Red. The iPod has taken over the mp3 player market leaving many companies struggling to compete with it, it was basically an instant success with the launch of the first version, and since then it has all been uphill for Apple and the iPod line of products. The new nano offers a large LCD viewing area, an accelerometer for games and navigation, along with of course being very portable and well made.

So first up I’ve got the unboxing and a brief tour video for you showing the basic features etc:

Conclusion:
The 4th Generation iPod Nano offers a few more features over the last generation that I think people will appreciate. The interface is great, the screen is bright and vivid and works well for pictures, videos and everything else it does.
The built in accelerometer is a a nice added feature that adds another dimension to using the iPod, and makes it kind of fun to use as well.

Pros:
Accelerometer is useful and fun
Easy to use
Well made
Lightweight and very portable
Lots of content for it on the iTunes store
Videos and pictures look sharp