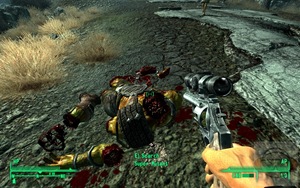 Ok, so I’ve heard that Fallout3 is controversial but I can’t figure out why exactly though or what’s so controversial about this game. The controversy could be that Bethesda made such a great game all the others will be left behind? I can understand where some might say the whole post-apocalyptic thing is controversial, but I just don’t see it, it’s game only after all.

Fallout3 is set in the far future after the world has basically ended due to the usual things, greed, power, and nuclear war, eventually I’m sure it will end this way, so it might be a peek into our own futures… Seriously though Fallout3 is a magnificent game in visuals, actual gameplay and storyline, it’s a bloody, gory romp through the post-apocalyptic wastelands that will keep you coming back for more.

When you start the game, you start out at birth, pretty much literally just coming out into the world, and from there it’s all pretty much downhill. It turns out that you actually live in a fall out shelter or Vault as they are called and the game continues on for quite a bit going through the stages of life until you’re a teenager, that’s when your father decides to leave you. At that point in the game you decide to leave the safety and security of the vault to enter the wastelands in search of your father, where of course you’ll need to quickly adapt to the new harsh environment you’ve just decided to venture out into. Along the away you’ll meet many people and things, many of which are just there to do you harm, but some are friendly and you’ll actually learn quite a bit from them about yourself, your father and how to survive in the wastelands.


So this is a downloaded game from Steam, no boxshots, but I’m sure you know what the box looks like by now. I also don’t have an in game movie for you either as apparently Fallout 3 doesn’t play well with FRAPS, it was hard enough just to get all of the screen shots I’ve got for you, the game does not like other things running in the background at all.

During gameplay you’ve got use of a Pip Boy, which is basically a computer strapped to your wrist to keep track of stats, objectives and items. It can be very useful as it also acts like a pause as well so you can easily switch weapons without fear of getting killed or use medicine in the heat of a battle to heal yourself. 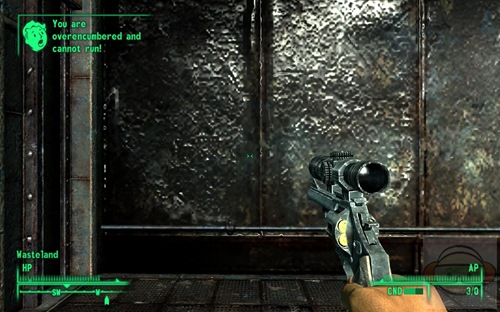 The game does allow you to see distances to get an idea of the scope and size of the world you’re in, I often found myself just looking around admiring the scenery. Most of the details are nicely done from afar, but when you get up close to certain things they look rather blah, flat and pixilated. 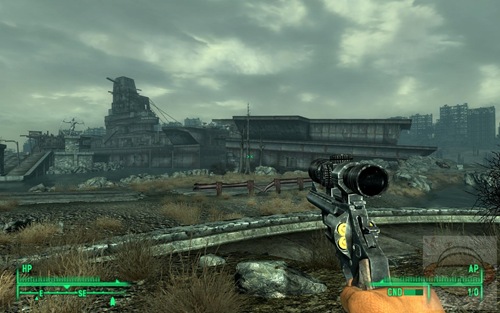 The game is very immersive, I often found myself playing for several hours at a clip and not even noticing how much time had gone by, it’s a lot of fun to play and you just want to keep playing to see what’s going to happen next, or what or who you’re going to run into.

The onscreen interface is very basic, a crosshairs in the center, hit points gauge and compass on the left side, AP or action points are listed on the right, along with ammo count and condition of the current weapon. The interface might be basic but it works very well, sometimes less is better.

Speaking of conditions of weapons, you need to keep an eye on the gauge as your weapon will not work as well if it’s not in good condition, you can get it repaired of course or you can even repair it yourself if you’ve got enough skill to do it. As for weapons you’ve got all kinds to choose from, probably the most I’ve seen in any recent games, from sledge hammers and pistols to laser rifles and miniature nuclear bombs, Fallout 3 has got it all in terms of weapons.

With the Weapons is also the VATS system where you can target a specific point on the enemy and shoot at it, depending how good your aim is you can be greeted with as nice cinematic of the resulting damage you inflicted.

Fallout 3 is all very RPG-esque in that you can acquire experience points and level up, you also get attribute points to apply to skills to make you better at them, and there’s also specialities that you can acquire as well. Everything has a purpose it the game and in shaping your character, the game will change as you change, or the game will be determined by your players personality.

There are missions of course, it’s very mission based, but many of them can be solved in different ways, so it will be a different experience for everyone.

One possible gripe I could have is the walking, you’re going to do a whole lot of walking around in Fallout 3, and I mean like 30 minutes to get where you’re going, but along the way you’ve got the great scenery to look at and of course you’ll run into the occasional mutated animal, wild dog, robot or super mutant to keep you occupied.

Conclusion:
Fallout 3 is a game that I can easily tell you to go out and get, it is well worth it as it will keep you playing for many, many hours. It’s got quite a bit of replayability as depending on your choices things will move along differently for the player in the game.

The graphics, gameplay and storyline are all top notch, Bethesda did an excellent job with Fallout 3, and I personally can’t wait for a Fallout 4. I can easily see Fallout 3 winning game of the year and many awards, it’s just an all around excellent game.

Cons:
Lots of walking around