Are you ready to rock?! Music games have become wildly popular, and I can understand why, they’re just a ton of fun, and allow people to get together and enjoy music and games. If you’ve paid attention to my reviews then you’ll know I love music, and I love playing games, combining the two gives me a chance to really enjoy myself, let my hair down and relive my errant, head banging youth, which some part of me still hasn’t grown out of…

The Guitar Hero series is wildly successful, and with good reason, it’s tons of fun and it’s got some great music to go with it. Today I’ve got Guitar Hero World Tour for review, it’s the latest edition to the series of games from Activision and Red Octane. My initial impressions of GH-WT were those of excitement, and immense enjoyment, I even went and got Metallica Death Magnetic from the GH store, but those initial reactions soon turned to those of frustration and anger, after only about eight hours of play the guitar was broke…

If you read our Worst of 2008 list, then you’d know that GH-WT made it to that list, or at least the hardware did, the game is great and lots of fun, but the hardware, frankly, sucks! I’ve read many, many stories of people with the same problem as myself, including one guy who returned his kit 17 times, that’s just stupid and ridiculous for such a problem to exist on a game series that has been around for some time now and is so popular….

Anyway, I’ve got a bunch of videos and screenshots for you inside, so read on…


First up I’ve got an unboxing video for you, check it out and continue on:

Here’s another video for you, it’s the intro to the game:

Guitar Hero World Tour delivers more ways to play than ever before. Virtual musicians can live out their rock and roll fantasies by playing either a single instrument, or any combination of instruments within the game, in addition to the full band experience. In addition to all of the online gameplay modes from Guitar Hero III: Legends of Rock, Guitar Hero World Tour introduces Battle of the Bands mode which allows eight players to join online and challenge each other band-to-band to determine who is the best of the best. In the Band modes, up to four players can jam together, online or off, as they progress through the game, and in single-player Career Mode, players can jam on any of the instruments in-game utilizing the controllers in branching venue progression enabling them to rock out in the order of their choice.

The game’s innovative new Music Studio lets players express their musical creativity by giving them access to a full complement of tools to create digital music from scratch, utilizing all of the controllers, and then play their compositions in the game. Music creators can also share their recordings with their friends online through GHTunes where other gamers can download their unique compositions and play an endless supply of unique creations.

First up is the menu, it’s easy to navigate and gets you where you need to go: 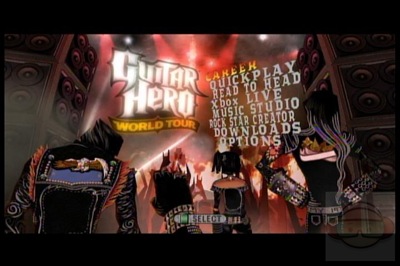 Here’s a video of the menu as well:

One of things I did find rather cool was the character creator, you can create your in game character to look like you if you want, with full control over pretty much every aspect of the characters appearance. You can also have a custom guitar as well, and unlock others as you play. 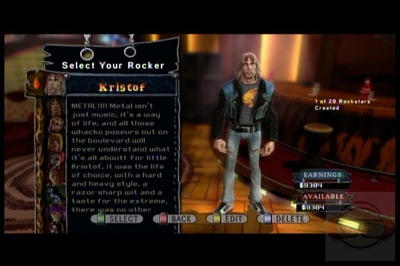 The main mode is career mode where you go on World Tour as the title suggests, here you can earn in game cash to purchase things for you and your band. You can play gigs all over the place for free, or you can pay to play gigs as well at more popular spots.

Here’s a video of me playing career mode, be warned though, I’m not that good at it yet:

One of my favorite parts of the game is Quickplay mode, here you can select six songs to play for practice basically.

Here’s another video of me playing, this time in Quickplay mode:

One of the things I found cool as well was the fact that the stars actually appear in game like Ozzy, Ted Nugent and others to play with you or challenge you to guitar duels.

Here’s my guitar dual with Zakk Wylde, I recorded this one on the easy mode, so no buttons were involved, it’s just strumming. The different difficulty modes are great as well, they let novice players like myself get accustomed to the game before throwing you into it. There’s also a trainer section as well so you can learn and practice the basics.

The graphics are decent overall, and I really like the scenery and settings, it really adds to the ambiance of playing on a live stage in front of fans.

There’s also a section called the Music Studio where you can create your own songs and even share them with your friends so they can jam to your creations, here’s a quick tour of the Music Studio:

Guitar Hero the game is great, the hardware, not so much. My suggestion, if you like the series, is to go buy the game alone, then get with one of the after market companies and buy one of their guitars, you’ll save yourself a lot of aggravation in the long run. So yeah I went and got a new guitar kit, but I’ve also recently got Rockband2 and I’ve been using the guitar from that to play GH:WT as I just don’t want to deal with it and the chance that it’ll break yet again

Stop over the GH forums and you’ll find quite a few people that are seriously miffed over this whole thing, one guy returned his guitar 17 times because of the problems, others have even gone and took matters into their own hands and replaced the switches themselves as they were just fed up with the whole RMA an return process.

Conclusion:
Guitar Hero World Tour the game is excellent and tons of fun, it allows you to really rock out to your favorite tunes, create music to share and just really enjoy yourself.

All the fun though ends when the hardware breaks, I just can’t quite fathom how a series like this that is so popular can screw something up this bad with poor quality controls as is seen here with a guitar that breaks after only a few hours of using it. Activision and Red Octane really need to do something big to fix this, I’ve read quite a bit and the fans are rather pissed right now about this whole thing, me included…