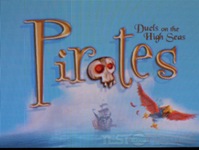 Pirates: Duels on the High Seas is a top-down action game that puts you in command of a fancy 18th century pirate ship. Blasting your way through the waterways, fighting Navy forces and other pirates, you command your ship in search of seven keys. Finding them all will allow you to unlock a very lovely treasure.

There are seven seas to tackle and 70 levels between them, plenty of weapons and gold to accrue, people to hire, and general pirating to be done. 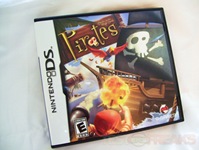 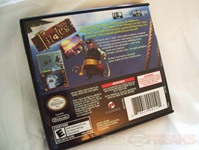 From the box art, you can tell this is a youth game. The animation is juvenile and comical, and that’s okay. It is important to keep that in mind while playing.

Nothing about Pirates is remarkable. It doesn’t have a lot of lasting appeal, and while the gameplay does provide some entertainment, it gets dull fairly quick thanks to extreme monotony. This is the result of the game operating on the same level throughout its progress. The story lacks highs and lows, is missing moments of tension and trouble, and requires no reasoning or tactical application – it’s just a flat title.

Pirates: Duels on the High Seas

Wanted! Hearty crew mates for the nautical adventure of the year! Must enjoy battling sea monsters, fighting pirates, discovering buried treasure and performing feats of daring bravery on the High Seas. All aspiring crew members should report for duty now!


Pirates: Duels on the High Seas is a frantic nautical shoot-em-up game that encompasses naval battles, running blockades, battling sea monsters and discovering treasure. So get your strongest sea legs on and prepare to embark on the adventure of a lifetime!
A chance encounter with an old sea-dog and the legend of a fantastic treasure – Thus begins an epic adventure for the ‘Seven Keys of the Seven Seas’! In an era when Britannia ruled the waves and pirates terrorized the oceans, the legend of Blackbeard’s treasure and the Seven Keys has seen many a pirate to an early grave with their fabled curse and tales of agonizing death for those that dare to pursue them. Faced by the prospect of such a death should you fail, and with the allure of untold riches should you succeed, your adventure begins!

The main content of Pirates: Duels on the High Seas is within its story mode. Here, the text-based dialogue tells you about a captain fearing mutiny from his crew, as there has been little treasure to be found of late. To his good fortune, a fellow gives him a map with the locations of seven cursed keys that open Blackbeard’s treasure. Handily enough, one key is located in each of the seven seas, and you’re off.

That’s really all there is to the story. 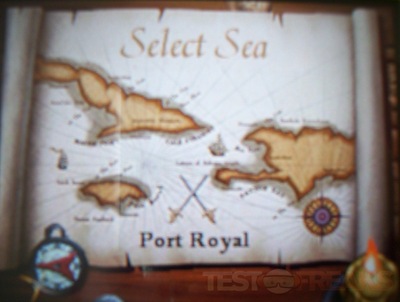 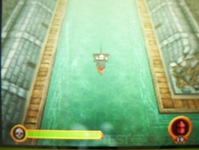 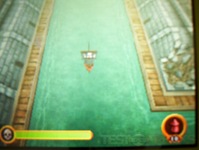 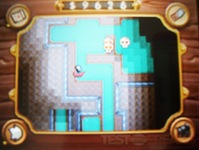 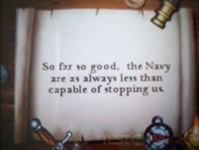 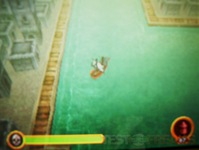 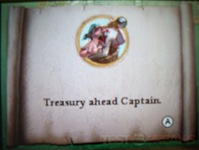 Three difficulty levels are available; easy, medium and hard. Easy ships are huge and take more damage, while the hard ships are naturally smaller and weaker. During play, the top screen shows 3D renderings of your ship and its surroundings, and is where the action of the game takes place. The bottom screen serves as a map, letting you know where upcoming enemies, treasure and obstacles are. The map uncovers itself as you move through it, much like that of an RTS game.

Unfortunately, the game feels more like you’re navigating a ship through the Venician canals than the high seas. Game play consists of you commanding your amazingly fast boat through tight corridors. Despite the story’s attempts to make you think you are on an epic quest for buried treasure, there really isn’t much to do in any of the 70 levels but move through the one-way linear path until you reach the end. That’s about all you do, and that’s why the game doesn’t hold your interest for very long.

The controls are a little rough, both in layout and in-game performance. You use the triggers to move forward or backward and use the D-pad to steer. That’s fine, as long as you don’t put too much thought into why a pirate ship can accelerate in reverse. The ship turns on-screen with the radius of a Mack truck, which means you’ll be banging into the walls of the “sea” if you accidentally pass up an object or are trying to thwart an enemy. Buttons entirely comprise the control structure, so there is no use for the stylus (and no real acknowledgment of unique DS possibilities), other than to tap the screen every now and then for a power-up.

This control structure can get tedious at times. Every piece of treasure or weapon you acquire is picked up by piloting your ship atop the item as it floats in the water. Some are there permanently, others come from destroying ships. Your map on the bottom screen will signal you when there is something to pick up in either situation. You’ll want to check the map often and take your time, though, as it’s not 100% reliable. There is a distinct lag between the game and the map, which is pretty annoying. For instance, when you destroy a ship, the ship’s enemy icon on the map doesn’t disappear for a good five seconds or more.

As far as combat goes, you can shoot unlimited cannonballs from the sides of your ships with true pirate style. They will automatically fire from whatever side of your boat the nearest enemies are located, and you are required to line up the shot so it hits them. You can also pick up other weapons, like rockets, which fire with a different button and are usually shot straight forward. Unfortunately, because of the directly overhead camera view, you often can’t see enemies until you’re right up next to them. You’ll know they are coming thanks to the map on your bottom screen, but you won’t see them until they’re in your face. This removes any tactical play, as you really just wait until you see them, turn, and fire.

No damage meter or real sense of destruction comes from hitting the enemies, so until they start to burn (which happens right before they’re about to blow), you won’t really know how much you’ve damaged them. This can make combat a little annoying.

It’s already been noted that there is little to do in this game – fight your way through the path to the other end. This is furthered by the fact that you don’t usually even have to fight your enemies. Sometimes, you have to defeat all the ships in an area to unlock a gate or finish the level. Otherwise, you can just float on by the assailing ships, truly making the game pointless. 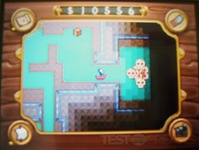 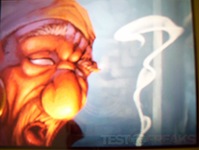 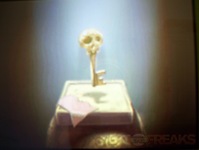 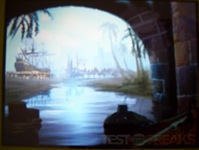 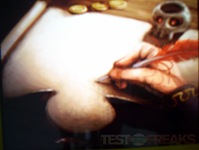 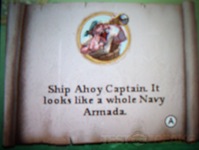 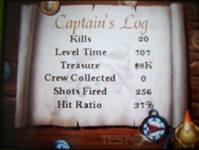 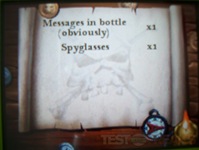 The sound is pretty sparse. The music, when it’s there, is alright, but it doesn’t play during levels until each sea’s boss fight. The only thing you hear while playing is the sound of wind and the firing of your weapons. Oh, and the occasional “arrr” from a pirate.

Graphically, the game isn’t great, but it’s not the worst thing in the world. The water looks fairly nice, every now and then a seagull flies overhead, and it’s pleasant. It does get laggy now and then, as the frame rate drops when the screen gets full of ships. Between levels, the story is furthered by still image graphics and text telling you the story. While these stills are a little dull, they are very beautifully drawn, and are quite nice to look at.

You will occasionally find people floating in the water. You can bring them on board to do things, like be your lookout or fix your ship. Once you have these guys, you’ll get some benefits, like seeing a little more of the map ahead of time, your health will slowly regenerate, etc. However, they come real early in the game and aren’t hard to obtain. They cost money to bring on board, but you constantly collect money throughout play, and there’s nothing else to spend it on. This makes the whole finding treasure concept and crew hiring feature pretty redundant, openly handing over one more game element that had potential to be something you could work towards. 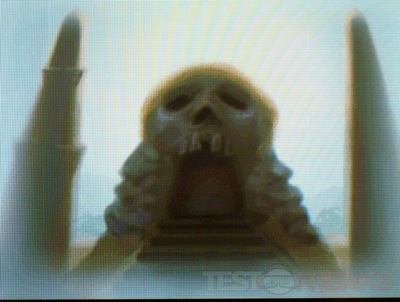 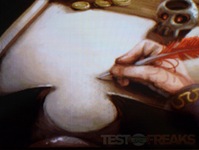 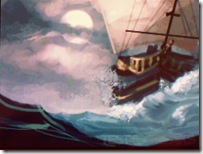 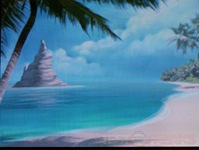 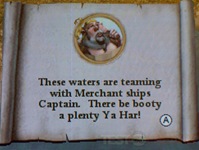 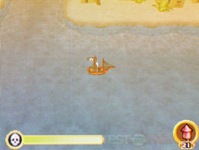 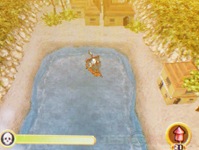 Everything becomes tiresome and repetitive after a little while. There are challenging bits, like most off the boss fights, where your ship can take huge amounts of damage pretty quickly. However, even this is undone by the fact you have a guy on board that makes your ship’s health constantly replenish. All you have to do is park your vessel somewhere for a few minutes and wait for your health to fill back up, return to the fight, and repeat until the enemy is dead.

Those who love pirate talk will enjoy this game. Everything is spoken in pirate talk. Everything. Ridiculous pirate talk, too. It’s sort of funny, sort of annoying….

The game also offers a skirmish mode which pits the player against a bunch of ships. It’s not interesting in the least.

Pirates: Duels on the High Seas is a game that could have potential. It has a lot of the right ingredients, but they all get executed wrong or ignored, leaving us with a game that operates in a constant state of dullness. While it provides a little bit of entertainment for a while, the gag quickly wears off thanks to the design, making it a hard title to recommend even at its budget retail price of $20. The game is obviously designed for children, but I have trouble believing a child would be able to harness their attention to this game longer than an adult. Likely the opposite. 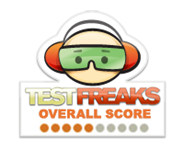 5 comments for “Pirates: Duels on the High Seas – Nintendo DS”