Do you have a need for speed? Well Pyrroblazer from Candella and Eipix has something to satisfy that need called Pyroblazer. Last year Pyroblazer was released, this year they’ve released Pyroblazer Gold which is essentially the same game but with some added features along with some bonus materials like an additional Blazer, an Art Book, Sountrack for the game, and Ultra Hard AI setting and they’ve even included a second mini-game called Apocalypse of Aperion. Pyroblazer is a super fast futuristic racing game that’s actually a lot of fun to play. The graphics are beautiful, game play is smooth and fluid and the game uses Physx as well for added realism. The cars are replaced by Blazers which are futuristic space ships, each Blazer has its own attributes and it’s even equipped with weapons so you can knock out your foes.

Pyroblazer Gold is a downloadable game, so there’s no box shots for you.

The main menu consists of a few options. In the options you can adjust video, audio and controls. 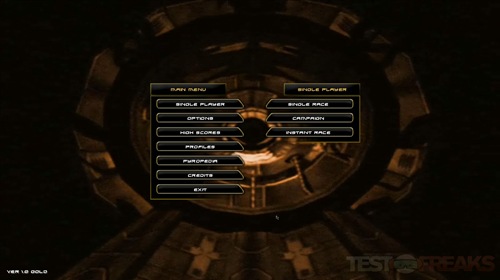 You can have several different profiles a well so other people can play and have their progress saved. 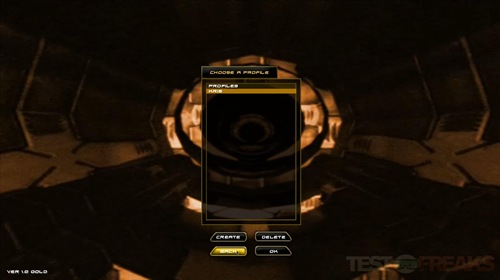 The menu item titled Pyropedia is a section where you can learn more about the game, the settings, the ships and the weapons you’ll be using. 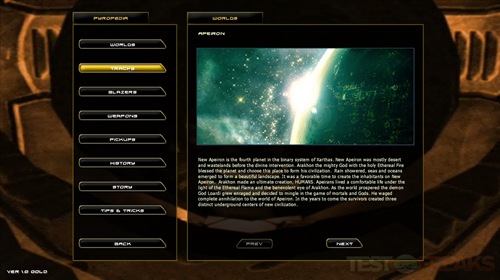 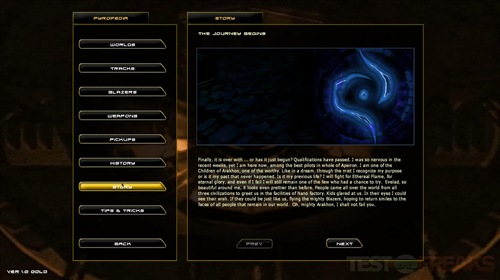 There are a few options for game play including Single Race, Campaign and Instant Race.

There are five ships available when you start, you can unlock more ships as you progress in the game though. Each ship has its own attributes like speed, acceleration, turbo and hit points along with varying weapons. 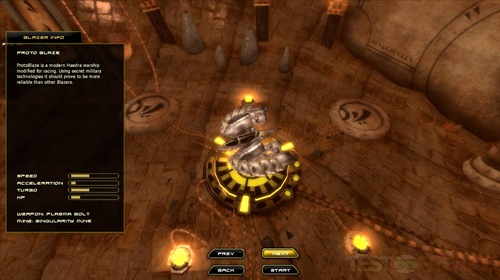 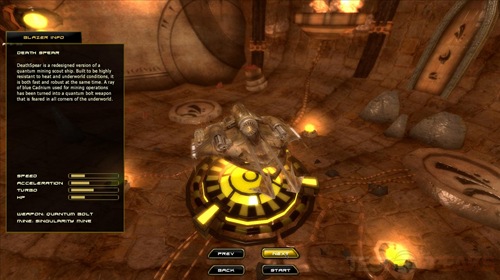 Once you choose a ship you can begin to play, in single race you can choose several options for game play like race type, laps, difficulty, weapons of or off, dynamic objects on or off and if you want to have unlimited turbo. 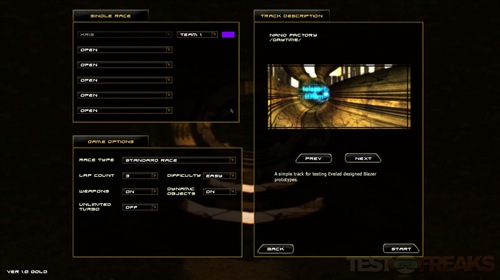 In the Campaign or Tournament mode you’ll start at the beginning and work your way through the planets or tracks. 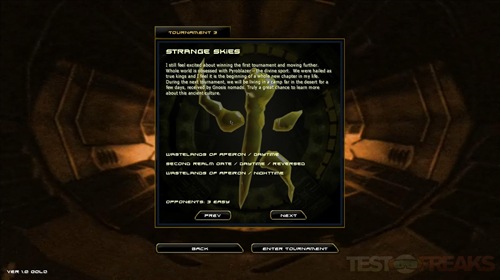 Set amidst the awe-inspiring locations of New Apeiron, players get the opportunity to race through a multitude of environments using a wide selection of anti-gravity craft known as Blazers. In their quest for glory, players can blast their way through the scorched valleys of Gnosis, the deserted cities of Haedra or the densely populated Underdome of Evelads.

As the players fight their way through the championship, improved Blazers with better speed, handling and superior firepower become available. Players also have the ability to pick up weapon and ammo upgrades during the race, further enhancing their ability to land the killer blow.

Powered by Eipix’s proprietary Ultra Engine and Ageia’s PhysX middleware, the game offers racing and sci-fi fans an experience unlike any other in the genre.

In addition to all the features in the game released last year, Pyroblazer Gold Edition includes:

Pyroblazer Gold Edition on the PC will be available to buy on November 8th 2009 from www.eipixstore.com

Pyroblazer Game Play is fast and furious, controls are keyboard and mouse. The graphics are very nicely done, but you’ll be going so fast you won’t have much time to apprentice them really. All of the scenery is nicely designed and rendered, I played it with an ATI Radeon 4870 1gig video card and had the resolution at 1920×1080 with most settings fairly high and had no issues with playing the game. 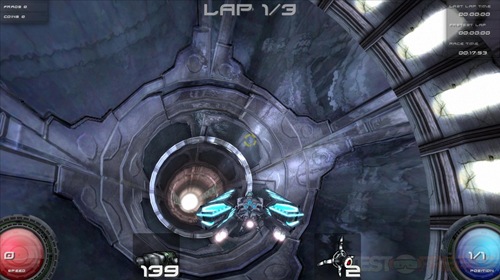 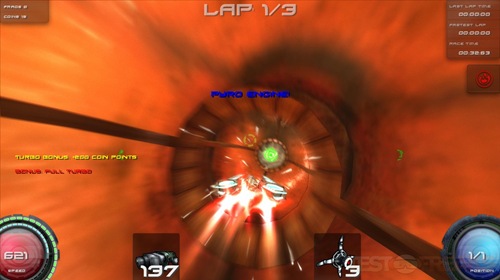 On the screen you’ll have a status display showing the laps at the top. There’s a lap counter/timer off the top right of the screen as well. On the bottom left of the screen is you speed and you turbo boost level, int eh middle you have ammunition levels for both weapons and then on the right you have your position in the race. 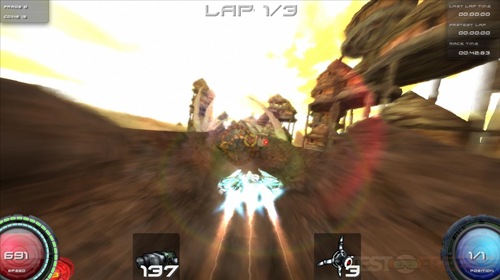 While playing you can collect coins to add to you score along with power ups as well. You have a main weapon and a secondary weapon with additional types of weapons that can be picked up while you’re playing. The main weapon is usually a gun and the secondary is usually a mine that you can drop. You’ll have have access to a limited turbo boost as well that recharges after use. Each ship has its own attributes in terms of speed and length of turbo boost, so you’ll have to choose wisely.

The AI in the game is fairly smart depending on which difficulty setting you choose. If you’re playing easy you can comes in first place almost every time if you just control your Blazer and fly right. As you move up in difficulty the AI ships become more aggressive and faster so you’ll really need to know your stuff before moving to a higher difficulty.

Overall Pyroblazer is a fun game that should keep you coming back for more. I like it quite a bit actually, it’s a lot of fun and it’s fairly easy so that almost everyone can play.

The soundtrack is decent, it’s sort of a mix between rock and techno basically, but it fits well with the futuristic settings.

Pyroblazer is a fun game yes, and you’ll be hard pressed to find a game of this type in the same price bracket. Pyroblazer is a budget game, and yes it’s worth the cost coming in at $14.84 US Dollars, but it’s not perfect.

The camera angles in the game are odd, the angle makes it hard to judge where you’re going so you’ll end up bouncing into and bouncing off of walls quite often. The feeling of speed you get is primarily due to the use of tunnels and closed in spaces, the camera angle used for Pyroblazer makes it hard to find the center of the tunnel though and keep yourself on track.

The controls are very sensitive and you’ll find that the smallest movement can easily send you crashing into a wall and you’ll often overshoot targets like power-ups that you’ll try and get.

Another issue I’ve got with Pyroblazer is the use of invisible walls, you really don’t have much freedom of movement in the game, you’re on a set track and can’t go off course really. Your constantly moving forward at a fast pace trying to avoid hitting the walls.

The background story behind the game is kind of pointless, I still haven’t figured out what racing around through tunnels has to do with saving a civilization, the story of confusing really, but you don’t really need a story to play the game.

Included with Pyroblazer gold is an old-school type game called Aperion After Apocalypse. In Aperion you’ll use one of three Blazers and play on a 2D board with movement limited to right, left, up and down. You also have weapons and you can pick up power-ups to help you along. It’s more of a casual type of game, but it’s rather fun to play. 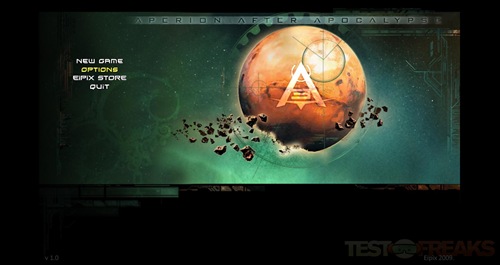 You’ll start with four tracks unlocked, and two that are locked. The difficulty levels are Easy, Medium, Hard and Insane. 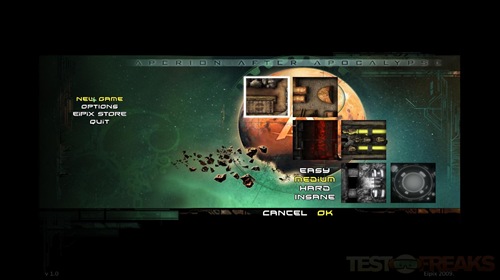 The Blazers are just like those in Pyroblazer but just on a smaller scale. 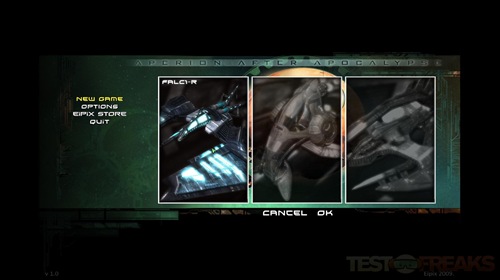 The graphics are very good for such a little game, the details are nice, and the movements are smooth. I found that even on Easy it’s a fairly hard little game. 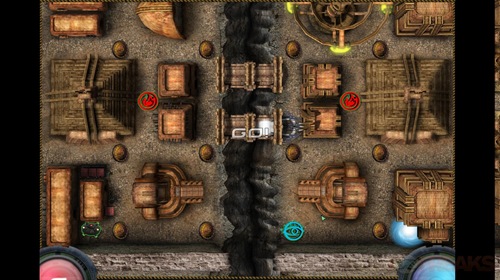 Pyroblazer Gold Edition comes with an Artbook and MP3 soundtrack but I can’t comment on that as I didn’t get that part of it, but I’m sure it’s a nice addition to the game.

Here’s a couple movies of me playing Aperion to finish this off:

If you never picked up Pyroblazer the first time around, I would suggest grabbing Pyroblazer Gold, it’s well worth the cost with the addition of the mini-game and the bonus material.  If you’re into racing and science fiction then you’ll appreciate this game, especially the price.

The included mini-game is fun for a time, it’s got that retro gaming feel to it. It kind of reminds me a Pac-Man honestly, and that’s not a bad thing really.

Pyroblazer isn’t a perfect game by any stretch, but the developers tried to create a fast paced futuristic racing game and there they succeeded.  There are some issues with the game, but for the price, most can be overlooked.

← ‘Sodium One’ Provides Futuristic Multiplayer Gameplay and Evolving Adventure to PlayStation3 Users
Year In Review: Best And Worst Of The Tech World 2009 →