I can pretty much bet that if you have a computer if your home and kids, a lot of what your computer does is gaming.  Oftentimes the mouse and keyboard are fine but for some games it just doesn’t work or feel right I think. Up for review today I have the ARCTIC USB Wireless Gamepad for PC that let’s you paly games with a controller instead of using the mouse and keyboard. If you’re a frequent console gamer then I’m sure you’ll appreciate being able to use a similar style controller on your PC as well.Testing was the fun part, I got to play games, and I’ve found the ARCTIC controller isn’t perfect but it works well.

The ARCTIC USB Gamepad comes in a plastic clamshell style case and you can see the controller just fine through the transparent front and there’s specs and features listed on the back. 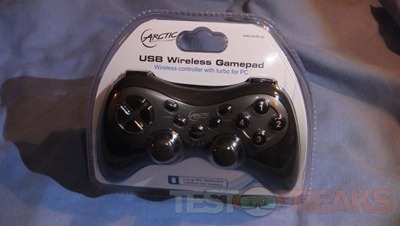 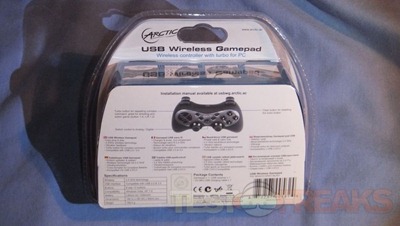 When you open the package you’ll only find the controller, USB cable and the wireless USB receiver. 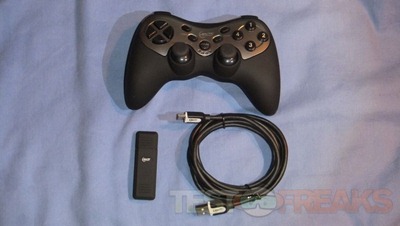 The cable is over six feet long and the USB receiver is small, about 2.5 inches long. 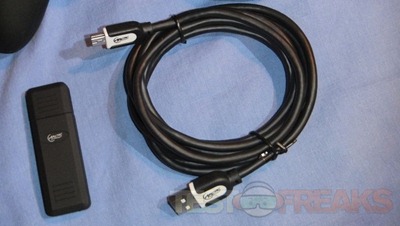 You can’t see it, but there’s an LED on the end of the receiver. 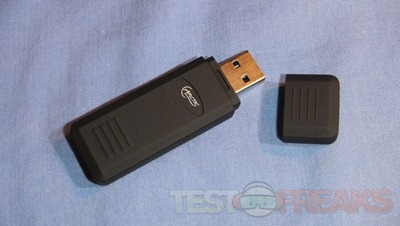 Here’s the gamepad itself, it’s silver and black. 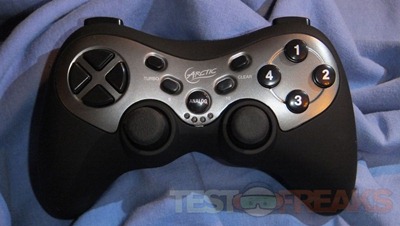 On the left side you’ll see a D-pad which is four buttons, then a turbo button and one labeled 9 under that with an analog stick there as well. 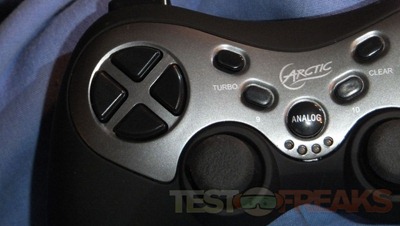 In the center is an analog button for switching between digital and analog controls. Under the button are four LEDs that light up to indicate charging and whether you’re in analog or digital mode. 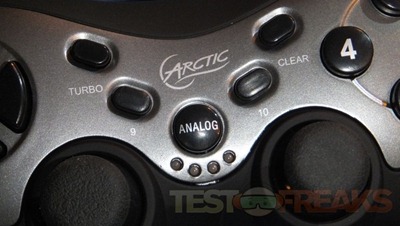 Off to the right side you’ll find four button labeled one through four and they’ve just like you’d find on an Xbox 360 or PS3 controller. 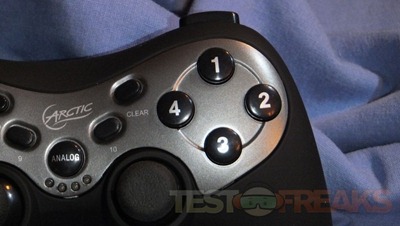 On the front of the controller you’ll find four buttons and a USB port for charging. The bottom buttons are sort of shaped like triggers. 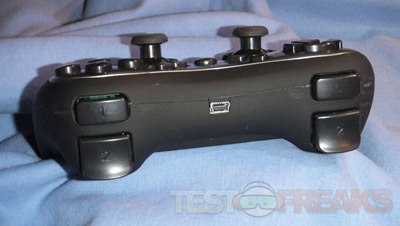 There’s not much on the bottom, just label. 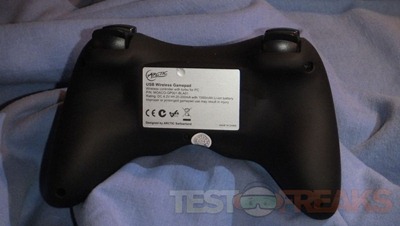 Here’s a couple other views of the controller for you: 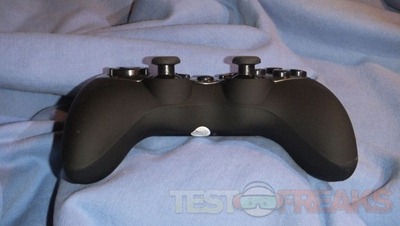 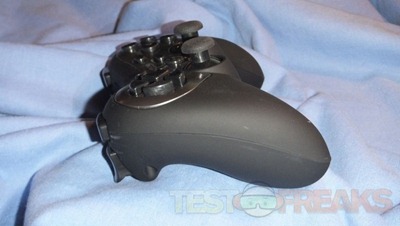 The shape sort of resembled the Xbox 360 controller I think.

It feels well made and it has a nice heft to it. 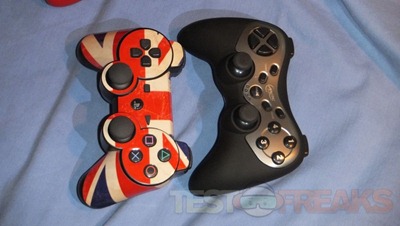 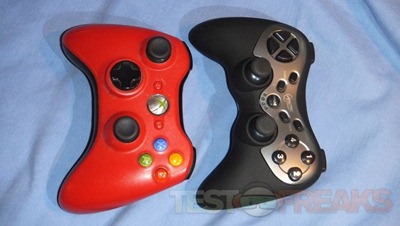 The black parts of the controller are covered with a rubberized surface to make sure you get a good grip on things.

The D-Pad buttons on the ARCTIC controller are larger and spaced farther apart than that of the PS3 controller, I like this design quite a bit.

The numbered buttons on the right side are slightly larger than both the PS3 and Xbox 360 controllers and also a little bit farther spaced apart in comparison.

The analog sticks work just fine, they’re spring loaded and snap right back to center when you let go, the springs actually feel a little looser than that of the Xbox controller, but about the same as the PS3 one.

Personally I like the PS3 controller better myself and the button layout, but I also like the thickness and full-handedness of the Xbox 360 controller. The ARTIC controller gives me what I like for PC gaming.

I have to say I do like the trigger style buttons on the shoulders, it keeps your fingers in place.

I want a controller that will work with all games and for the most part this one will sometimes.

I’ve gotten away from console gaming, not sure why, I think I’m getting back to my PC roots as it were so I do a lot more gaming on my PC now. I’ve recently got a lot of new games, well not new, but older games that I never owned on the PC, and then some new ones as well. I took advantage of deals at Amazon and Steam, and I’ve got many I haven’t even played yet.

To use the controller you’ll need to charge it first via the included USB cable.

The LEDs on the controller light up when charging.

You’ll then need to install the drive from the ARCTIC website and they suggest you calibrate the controller with the built-in Windows calibration tool found in your Device Manager in the Control Panel.

For testing I played games of course!!

For some games the controller worked just exactly as it should. For example it worked perfectly fine in X-Blades and Laura Croft: Underworld without me doing anything.

For some games the controller worked but the controls were all messed up. For example I tried Darksiders and it wouldn’t move the camera at all, in fact it made him attack when I tried.

For some game it recognized the controller but wouldn’t work until configured. For example I loaded up Need for Speed: Hot Pursuit and I pressed a button and up popped a message saying that controller is not setup for this game. I went into the settings and mapped all of the buttons and the controller worked perfectly fine, just like I was using the Xbox 260 controller I normally would use.

That’s a just a few examples for you, I tried a lot of other games as well with the same mixed results.

This isn’t to say something bad about the controller, I’ve got several gamepads  from different companies and they all act the same, none of them work perfectly or at all with every game.

I’ve yet to find a gamepad controller that works with everything.

The controller does have a vibration function that worked just as it should with games where it was available.

Battery life is great, you should be able to get about 30 hours on a single charge but if that’s not enough you can charge and play at the same time via the included USB cable. The cable is about 79 inches long or about six and half feet which should be long enough for most people I would think.

Conclusion:
The USB Wireless Gamepad from ARCTIC isn’t a bad product overall, it works just like it should, it lets you play games with a gamepad just like on a console.

It’s not perfect though, but then again I haven’t come across any controllers for PC that are really. It works with some games just fine out of the box, then with some game you’ll need to configure it and then with some it doesn’t work at all. The same can be said about most gamepads for the PC on the market today, so this is no surprise really.

The controller is comfortable and easy to use, it has a nice long battery life and it installed quickly and easily.

Pros:
+Comfortable to use
+Long battery life
+Lots of buttons
+Can charge and play at the same time
+Works just fine with many games

Cons:
-Doesn’t work with all games