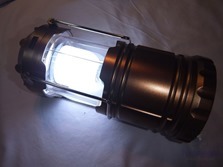 Up for review today I’ve got another product for the outdoors, sort of, it’s an LED lantern from a company called Bulldog LED and it’s sold as being for outdoor use but sadly I couldn’t find any sign of any kind of water proofing. The lamp is solar powered or you can use three AA batteries and it includes a USB port so you can charge you phone in an emergency. I like this lantern actually, it’s bright and it seems well made, it just needs a few improvements to make it better. Read on to learn more… 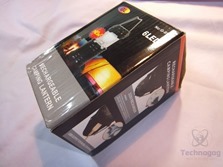 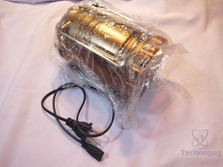 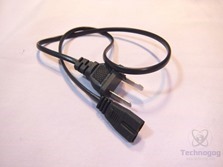 On the top of the lantern is the solar panel, it looks like any other. 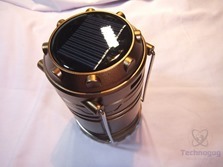 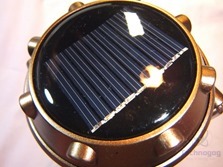 The whole top section easily unscrews and you can see what looks like three AAA rechargeable batteries in there. One thing to note is that there isn’t any kind of seal, no rubber gasket or o-ring in there to keep water out. 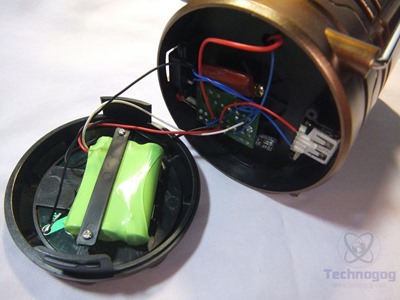 The lantern is about 5 inches tall when collapsed and just under 3.5 inches across at the base as that’s the widest point.  On one side of the lantern is a USB port and the other has a power port for use with the included cable and there’s an LED there to indicate power. 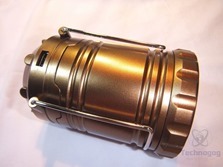 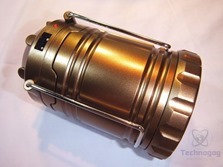 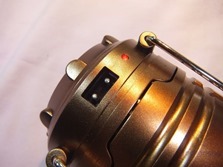 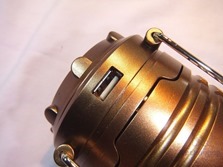 The lantern has two metal handles on the side that swing up to use as a handle and then fold back down against the lantern out of the way. 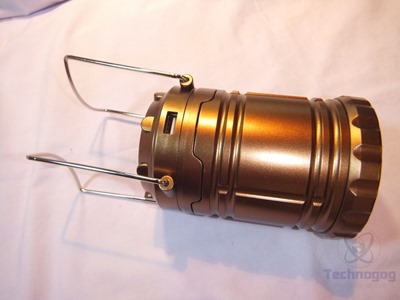 On the bottom is the battery compartment that unscrews so you can install three AA batteries for optional power. I noticed there’s no rubber seal or O-ring here either to keep water out. 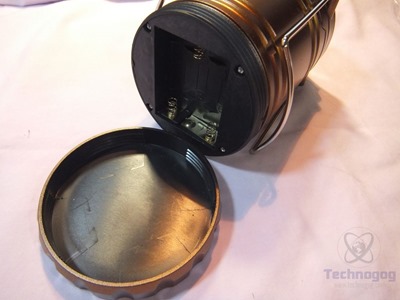 I charged it with the supplied power cable and outside in the sun. There’s an LED that lights up red to let you know it’s charging. I also noticed that it will charge just from light inside of your home, just under my desk lamp the LED lit up red so the solar panel seems very sensitive to light. One thing missing though is any sort of battery level indicator, it would be nice to know what the battery capacity is and the addition of a couple or few LEDs would make that simple. 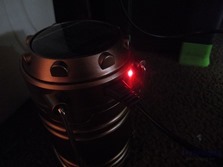 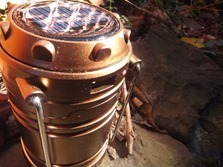 To turn the light on you just pull up on the top of the lantern which reveals the light and powers it on. When extended the lantern is just under 7.5 inches tall. The light is fairly bright, more than bright enough to light up a tent or light the way on a dark path and it offers 360 degrees of lighting. 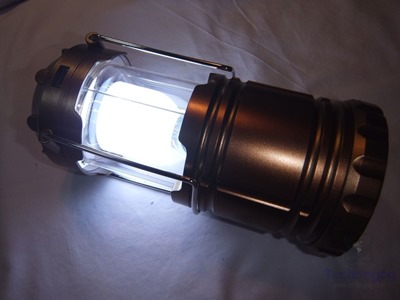 I tested the USB port by charging my Samsung Galaxy S6 and I used my Power Practical USB meter with it to test the power and it registered as 1watt at .2amps which isn’t much at all so don’t expect fast charging. This isn’t a surprise though as this is normal for solar charger like these, they don’t offer lots of power, they’re more for emergency situations and not to be used as a main power source. For an emergency it’s fine, it will give you power when you need it. 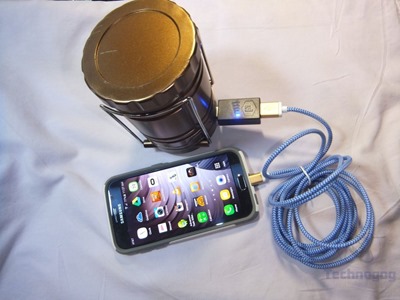 The Bulldog LED lantern is a decent product, it’s very bright and offers 360 degree lighting, it would be a great for inside of a tent or just to carry to light the way. The lantern is well made and I like the looks of it and it’s easy to use.

The USB port doesn’t offer much power so don’t expect fast charging but that’s common for solar powered devices so no surprise there.

The included power cord just looks and feels very cheaply made, not sure how long it’s going to last but thankfully it can charge via solar and you can even use regular batteries for power. I don’t understand why they didn’t just make it chargeable over USB, that would have made more sense and made life easier for everyone as it’s a common thing that everyone would have access to and you don’t have to worry about losing a special cable as you do here.

The battery life seems fine, I’ve only charged it once and it’s still very bright and I’ve been using it every night when I take my dogs out to do their thing so it’s several times each day it’s getting used.

I wanted to like this lantern and I still do, making it more water resistant is fairly easy, just picking up a couple rubber O-rings and putting them on the top and bottom sections will work just fine. The problem is what to do about the USB and power port, USB is fairly easy as I have rubber covers for those lying around, but nothing for the power port. I’ve seen many devices that have rubber covers over the ports that are made for outdoor use and this one should have them but for whatever reason doesn’t. I shouldn’t have to worry about any of that though, it’s advertised as water resistant so it should have basics like a rubber O-ring already installed for you

Cons:
-Not water resistant, no rubber seals at all
-No power level indicator
-Slow charging
-Cheaply made power cable
-No covers over USB and power ports