What’s in a name? Some products are named using some fancy made up tech-y word, while others such as today’s review item have a nomenclature that are direct and to the point. Griffin’s Stylus + Pen + Laser Pointer is the name as well as the description of the product.

With these three features in one pen you’d think of a bulky awkward looking plume; however that is not the case as the Griffin Stylus + Pen + Laser Pointer is one elegant device. It has a nice weight to it while sporting a classic appearance.

Lately Griffin has put out some unique Apple peripheral devices and this is certainly one of them. The Griffin Stylus + Pen + Laser Pointer is like a Swiss army knife for the tech lover.

The Griffin Stylus + Pen + Laser Pointer arrives in a white and orange box with a picture of the device on the front as both a stylus and as a pen. On the back is a list of features for the Griffin product. Opening the package we find just the Stylus + Pen + Laser Pointer. Noticeably absent from the box was an instruction sheet. Initially I had to look at images on the Griffin website to see how to convert the device from a stylus to pen. 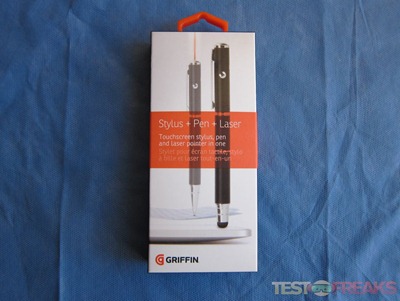 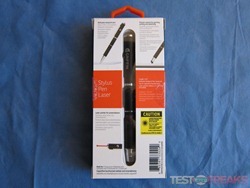 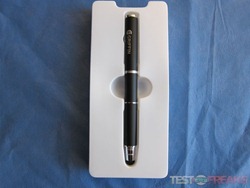 Griffin designed the Stylus + Pen + Laser Pointer to look professional and stylish. It is a solidly constructed metal pen covered in a black matte finish with silver accents. 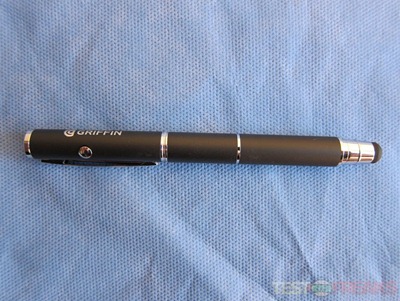 The pen is composed of three sections. At the front of the Stylus + Pen + Laser Pointer is the interchangeable pen/stylus tip; this section pulls out allowing either the pen or stylus be the active tip. 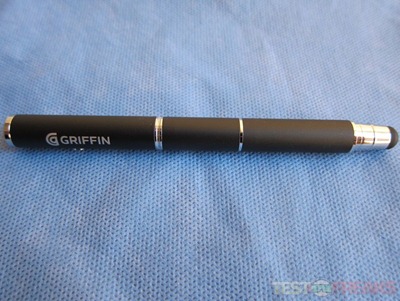 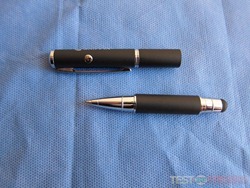 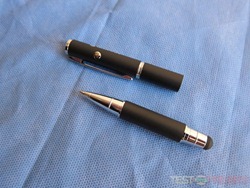 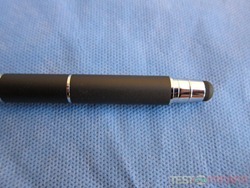 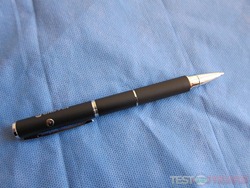 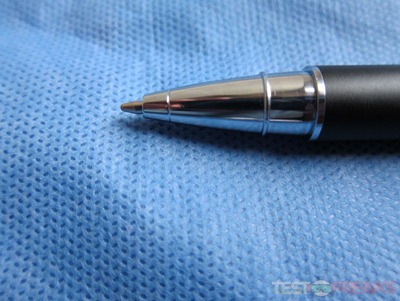 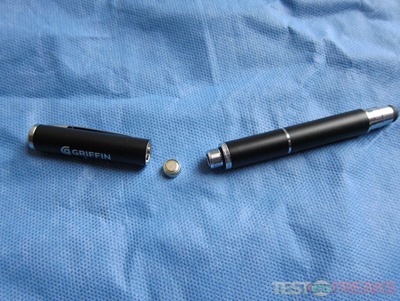 The rest of this back section has the laser activator button, a pen clip and the Griffin logo. Strangely this Griffin logo is printed from let to right which means it is upside down when used by right handed people; a little odd since most people are not left handed. 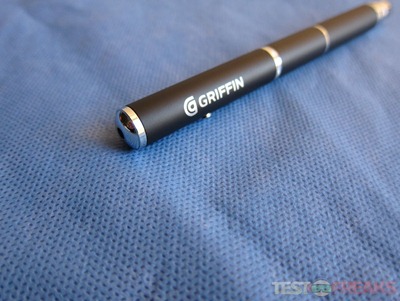 Stylus, pen, and laser pointer in one: this stylus is equally at home on touchscreen or projection screen, with a built-in laser pointer. And remember paper? So does your new stylus, with its built-in ballpoint pen.

For your touchscreen, Griffin’s Stylus is a balanced pointer with a soft rubber tip custom-designed to mimic your finger. It keeps your touchscreen free of fingerprints and smudges as it gives increased control over any touchscreen operation. It’s perfect for sketching, drawing, photography, flight simulator apps… any use where you need a finer degree of control than your finger.

This super-handy stylus is topped off with an integrated clip for your pocket or pencil loop.

· Use with any app for greater comfort and control

As a prolific pen user I found the Griffin Stylus + Pen + Laser Pointer to have a nice “heft” to it. A weighty pen has always been a personal preference of mine and the Griffin made this pen feel substantial but not bulky.

The included ink was more of a grayish black than solid black and the included pen cartridge is rather short meaning if you write a lot then you will need refills sooner than latter. Unfortunately as of the writing of this review there was no indication of what type of replacement ink refill is needed in/on the packaging or on the website. Thankfully my Griffin contact let me know that the Stylus + Pen + Laser Pointer uses a Schmidt-Mine 635 M ink refill. Hopefully Griffin will address this oversight. 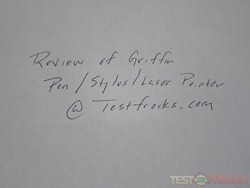 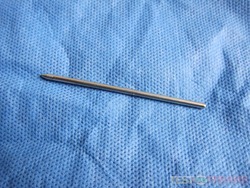 Overall I liked the pen but I did have issue with the elevated ridges just above the ink barrel that are designed for locking the pen half into the shaft of the body of the Stylus + Pen + Laser Pointer. This area pressed into my finger making it somewhat uncomfortable after long periods of writing.

Griffin actually made the stylus end with a rounded ridge, why they didn’t use it for the pen’s side is a mystery to me.

The stylus tip is broad, about half the size of a medium fingertip. The tip is soft and rubbery which works well with the capacitive touch screen of the iPhone 4 and iPad 2 that I used for testing. One drawback to the broad tip was fine precision drawing was not as accurate as a thin stylus tip. Thus I would not recommend this stylus for the digital artist.

The laser pointer is useful for those who are making presentations or teaching. The beam on the Stylus + Pen + Laser Pointer is quite strong and is very bright making it perfect for this type of use. Just don’t stare directly in the laser light or shine it into someone’s eyes. In addition the laser is always a wonderful source of amusement when you have a cat around the house to chase the laser light.

The lack of additional ink refills and the angled ridge by the pen are my two biggest issues with the Griffin Stylus + Pen + Laser Pointer. These are relatively small issues that Griffin can easily remedy in the future.

Overall the Griffin Stylus + Pen + Laser Pointer is a very nice pen that I am proud to use on a daily basis. Its geeky abilities are masked by a conservative body style. For those who use their iPad or iPhone as much as pen and paper will appreciate the built in stylus while the public speaker will get plenty of use out of the laser pointer.