It took me a while to realize that the battery compartment was on the front, but once installed all was well. I quite liked the remote with it’s illuminated navigation and volume controls. Some of the buttons which you’ll use often, such as the home button could have been placed differently I feel, and perhaps larger but once you know where it is, it’s no problem. The remote can also be programmed to operate certain functions of your TV although so far I’ve been unable to get this work at all with my 60” Sharp Aquos.

Harman has created a free to download app for your mobile or tablet which gives full control of your system. It’s available for both Android and iOS and gives you access to everything you have on the remote – useful if you can’t find it. Unlike most apps I’ve tried to control my tech, this one actually works and has all the features you need plus a bit more.

Generally speaking the unit has behaved as expected. I do have an outstanding issue with WIFI however, which does affect the use of many functions – accessing content from my NAS, YouTube, using NetFlix through ChromeCast etc. Whenever the system goes into standby mode (the dial is highlighted in a dim red in this mode) and I awaken it after some down time (such as overnight), it can’t find WIFI. The only way I can get WIFI back is to remove the power plug from the wall, reconnect and then power the unit on. This seems to be a consistent issue, not just an occasional one. I have updated the firmware (which is a simple process from the control panel) but haven’t noticed any difference in performance. Unfortunately HK was unable to offer any solution to this (I’ll publish an update if they do). Perhaps it’s a combination of the HK unit and the router I’m using, I don’t know. It’s just a little bit annoying.

I’ve also had a couple of times where the sound has failed to come through the speakers for no apparent reason. Unplugging and plugging back in fixed this too. I’ve had a couple of erroneous error messages relating to a WIFI dongle and some strange stuff on the display, some hourglass symbols which failed to go away and a few freezes. HK has tried to cram as much functionality into a small space, so I’m not surprised there are a few issues here and there – just like any other electronic device. The ease of upgrading the firmware does mean that these should be easy to fix eventually.

So far we’ve mainly looked at the BDS580 unit, it’s features and the menu system. Now we’ll take a closer look at the speakers, available separately as the HKTS65. The HKTS65 comprises of four identical satellite speakers plus the voice-matched midrange center speaker as well as a compact 200watt wireless (or wired) subwoofer.

The subwoofer dimensions are 267mm (L) x 267mm (W) x 353mm (H); height and weighs a respectable 9kg (just under 20lb). The rear has a variety of switches including one for bass boost (useful for extra powerful sound effects in movies) and a large sub volume control. The sub can be used wirelessly, or you can connect it to the system using supplied cabling. Not pictured in this review is the additional black box you’ll need to achieve wireless functionality. It’s not pictured partly because I chose the wired option and partly because I didn’t actually find it until a few days after I took the pictures (it was buried in the bottom of the box). It’s a great looking Sub unit, with a single white light on the top when it’s in use, a HK logo on the top and one on the front, everywhere else it’s just shiny black. The speaker cone itself is underneath, and it’s supported by 4 substantial rubber feet to stop it moving around. Each of the 4 satellite measures 88mm (L) x 110mm (W) x 272mm (H) and weigh 1.5kg. Two should be placed either side of your TV, and the other two slightly behind and to the side of the listener. You’ll need to place around with the positioning until you’re happy with the results. Each is a 2-1/2 way 25 to 150 watt CMMD (Ceramic Metal Matrix Diaphragm) Lite speaker – dual 3” flat diaphragm midrange drivers with 1” tweeters. This technology ensures the most lifelike sounds possible.

Easy to hook up to your speaker cables to the BDS580 (all are color coded), and with removable stands and speaker brackets for wall mounting, these are easy satellites to set-up, it’s almost impossible to connect up wrong (as long as you realize they are color coded). Everything you’ll need is there in the box. 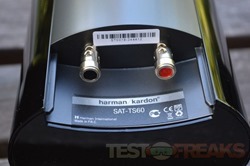 The center speaker measures 88mm (L) x 272mm (W) x 110mm (H) and weighs 1.45kg. As it’s name suggests, this is designed to be placed right in the middle, directly under the TV and generally deals with the dialogue of the content you are watching. The HK logo is on the top, and on the rear you’ve got the easy to connect speaker terminals. The speakers themselves are a couple of 3” flat-diaphragm midrange drivers and a 1” CMMD Lite dome tweeter. Using the supplied kit, the EzSet/EQTM III auto-calibration process precisely adjusts volume levels, speaker-distance/delay- time settings and equalization. This process does take a few minutes, and it does involve some quite loud sounds, especially from the sub so don’t do this as I did at nearly 10pm, as you might wake the kids.

When you’ve been used to sound from your TV or even from most sound bars on the market, your first listen to this system will blow you away (providing everything is set-up correctly). Voices sound like they are in the room with you, explosions send shivers down your spine, a sound effects make you wonder if there is something behind you. Let’s not forget you can also listen to music. I listen to a considerable amount of reggae, and this delivers as much bass as I (and my neighbors) can handle. I also listen to a variety of other genres and I find the sound so crisp and clean it’s delivered as close to the artist wanted it to be. To cut a long story short, I find the sound astounding, I can’t fault it. Your friends will be jealous, and you’ll get so much enjoyment and hear media in a way that you never though possible in a home environment and at this price.