Up for review today I have something that I haven’t reviewed in a long time, an SSD drive. Yes it’s been about 2 years actually, wow time just flies doesn’t it?! So for review today I have the OCZ Vertex 3 240GB SSD which features the latest Sandforce controller and uses the newer SATA III connection for extremely fast read and write speeds. If you’re looking for a truly fast way to speed up your system and basically everything you do then this is it.

Here’s the packaging for the OCZ Vertex 3: 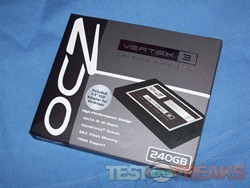 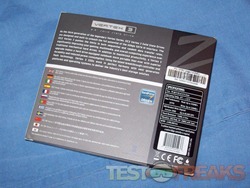 Inside the package you’ll find the SSD in anti-static wrapping, a basic user guide, 3.5” to 2.5” adapter and a cool sticker. 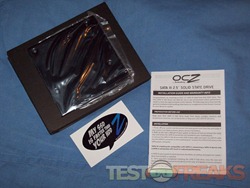 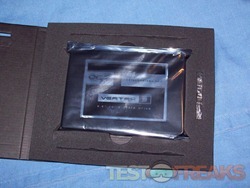 Here’s the tray, it’s metal and black with the OCZ logo on it: 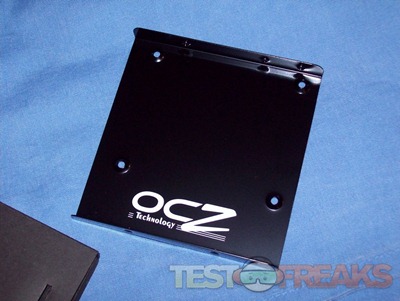 Then here’s the drive itself, it’s black with ID labels on the top and bottom with SATA connectors there. 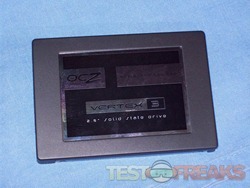 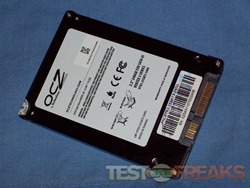 OCZ Vertex 3 Solid State Drives unleash the performance potential of the SATA 6Gbps interface, leading the speed revolution in this next-generation solution. As the first SSD to feature the latest Sandforce controller design, OCZ designed the Vertex 3 to push the limits in both sequential and random read/write rates to blaze past the competition when every MB/s matters. With incredible 4k file writes up to 85,000 IOPS, these latest drives take productivity, gaming, and multimedia applications to the next level to work in perfect symmetry with the latest enthusiast platforms.

Ok, so I don’t have any other SATA6 SSDs floating around, but I do have an SATA6 hard drive and regular SATA3 hard drives so that’s what I’m using for comparison to the OCZ Vertex 3. I’m looking at this more of an upgrade to a standard hard drive and how that will affect the performance of your system.

My system basically consists of an Intel Corei7 2600k CPU and an ASUS P8Z68-V Pro Gen3 motherboard which has Intel SATA6 ports on it.

For testing I ran benchmarks of course.

The first one I ran is an old favorite, ATTO Disk Benchmark: 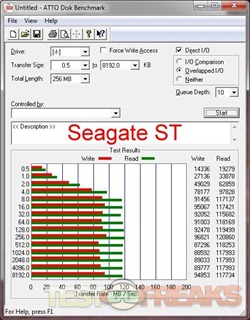 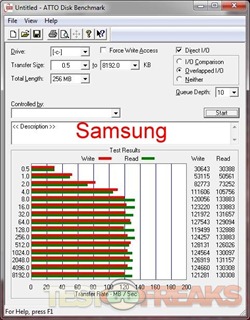 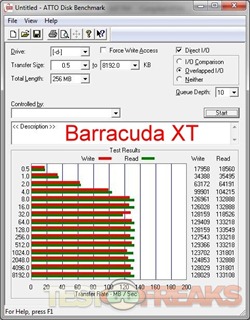 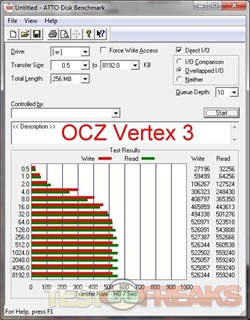 The Samsung is fast and so is the Barracuda XT, but the Vertex 3 is just ridiculously fast topping out at 526 MB/s write speeds and 559 MB/s read speeds.

The next test is CrystalDiskMark: 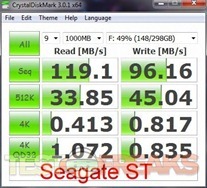 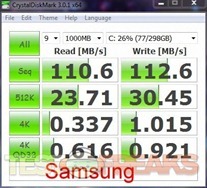 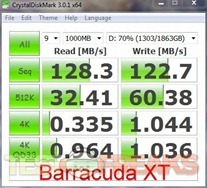 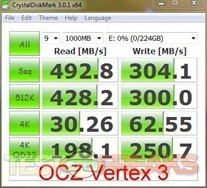 The numbers pretty much speak for themselves I think. The 4K test really shows what an SSD can do when compared to a standard mechanical hard drive.

I also ran benchmarks from SiSoft Sandra, the Physical Disks and the File Systems tests.

The first up is the Physical Disks test:

Benchmark hard disks (i.e. the disk itself, not the file system). As the test measures raw performance it is independent on the file system the disk uses and any volumes mounted off the disk.

Drive Score: is a composite figure representing an overall performance rating based on the highest read or write speed across the whole disk. Thus the higher the better. 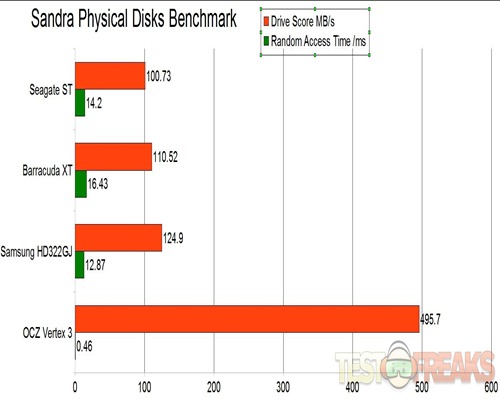 Here’s some detail of the two fastest drives:

As expected the OCZ is amazingly fast in everything.

The next test is the File Systems test:

Drive Score: is a composite figure representing an overall performance rating based on the average of the read, write, and seek tests, and file and cache size. It is intended to represent drive performance under typical use in a PC. A larger number means better performance. The weighting of the results is not equal it represents the distribution of different files sizes as used on these devices (obtained through field research). 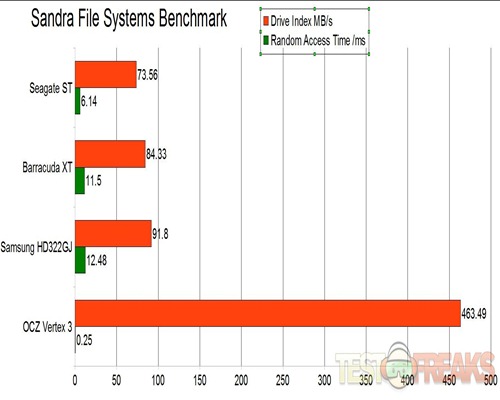 Here’s details for you of the two fastest drives:

Not much to say about either test honestly, the OCZ Vertex 3 is fast, very fast. I thought the Samsung F4 was a fast drive and it is for a mechanical drive, but the SSD just outperforms it in all testing.

The last test I ran is the AS SSD Benchmark. I don’t think I’ve ever used this test before but it’s one that is specifically made for SSDs. That being said I have nothing to compare it to at this point so there’s just some results for you. 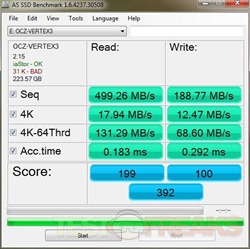 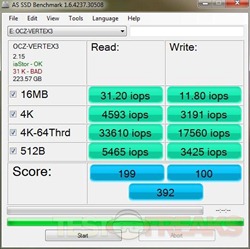 Then AS SSD has a copy test as well which is three tests for ISO, Program and Game. The ISO tests creates two large files, the Program is a folder with many smaller files and the Game test is a game folder with a mix of large and small files in it. 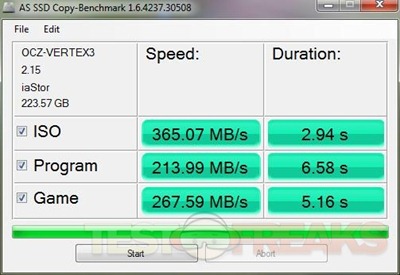 I also timed how long it takes to boot. I was using the Samsung F4 as my main drive, it’s fairly fast as you saw. I use a password for my computer so the time’s I recorded are from the time I push the power button to the login screen, and then put the password in as fast as I could, just a second or two, and then I let the computer finish booting which to me is an actual usable desktop with sidebar gadgets loaded. I should note it’s a fairly new Windows install as I got the motherboard and CPU a couple weeks ago so that’s when I did a clean install of Windows 7 Pro 64bit.

Yes there’s a huge difference in the boot times, I was totally amazed. Usually I have to wait until the sidebar gadgets load and even then it’s really not ready to do anything with. With the OCZ drive it was lightning fast, when I hit enter after inputting my password the sidebar gadgets were there already, no waiting at all. As you can see it’s a drastic increase in the speeds of boot time.

I should note that to achieve the speeds I got you’ll need a decent SATA3 controller. On the ASUS board I have both Marvell and Intel controllers and I found that the Marvell is a lot slower, by almost half really.

Conclusion:
The OCZ Vertex 3 is fast, there’s no doubt that it will drastically decrease the boot times of your computer and speed up everything you do with that computer. From my testing and experience here, upgrading to an SSD is the way to go when it comes to speeding up your system. It’s an SATA III connection and there’s obviously a significant advantage over the old SATA II standard.

I’m personally very happy with this drive, it’s like I’ve got a new computer really. It’s much more responsive and there’s virtually no wait time for me to begin doing something after I hit the power button, relatively speaking of course.. The biggest difference is after the login screen, everything loads almost instantly especially when compared to a mechanical hard drive.

The main issue if you want these speeds is to have the correct motherboard or SATA controller to use with this SSD.

Sure it’s a bit pricey but all SSDs are, and if you want the fastest drive out here you’re going to have to pay a bit more right?