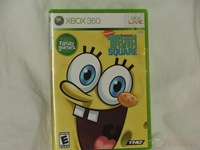 I think everyone knows who SpongBob is by now, he’s everywhere, that goofy little undersea animated sponge. What the appeal is to him I’m not sure though, I’ve never quite grasp the whole SpongeBob phenomenon, but he’s spawned a huge following among children and adults alike.

Today for review I’ve got another children’s game, this one is about everyone’s favorite sponge, the game is SpongeBob Truth or Square for theXbox360, and honestly I found it to be a goofy yet rather fun game to play. My kids love it, I played it and finished for this review, and they just couldn’t wait to get their hands on it. The game puts SpongeBob in one of his normal, goofy predicaments where he’s lost the Krabby Patty formula that he was entrusted with by Mr. Krabs.  The game continues on with the player playing as the beloved SpongeBob in single player mode where he’s reliving his fondest memories in an attempt to make him happy which will in turn help him to remember where he left the formula. Yeah I know the plot sounds wild and wacky and it is, the game features all the characters you’ll find in the TV series, and it even has a two-player cooperative mode so a friend can join in the fun with you.

Box Shots and a video for you:

The video is taken from a bit farther into the game, but you’ll see SpongeBob’s home where everything starts, or begins, it’s the central hub in the game. There’s a lot of cut-scenes in the game that help tell the story, and they’re done well. 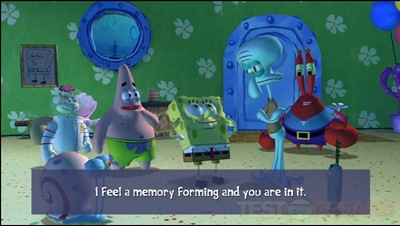 Between each level is a bit of trivia about the world of SpongBob. 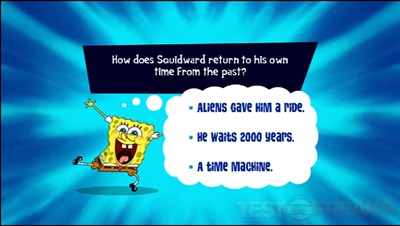 Hold on to your SquarePants for the ULTIMATE SpongeBob game ever!

SpongeBob SquarePants has gotten himself into quite a predicament. After being entrusted by Mr. Krabs to keep the Krabby Patty formula safe, SpongeBob is overcome with grief for losing the recipe. He then relies on the help of the most unlikely companion, Plankton, who wants the secret Krabby Patty recipe for himself. With the help of his friends, SpongeBob must use Plankton’s memory machine to retrace the happiest moments of his life to find the Krabby Patty formula in time for the Krusty Krab’s Eleventy Seventh anniversary.

* New Wacky Morphing Abilities:
Turn SpongeBob into a Sledgehammer Smash to whack intruders, a WaterBob sponge to spew liquid and stun enemies, or even an Explosive Canon to aim and blast baddies.
* Relive Side-Splitting SpongeBob Moments:
Reminisce through fan’s favorite SpongeBob moments as the game draws upon ‘The 10 Happiest Moments of SpongeBob’s Life’ and hilarious story elements from the animated television series.
* Share in the Hilarity with Family and Friends:
Play as SpongeBob or with a friend playing as Plankton throughout the entire game on both the Wii and Xbox 360 platforms
* Experience Exciting New Levels:
Run, jump and spin through 10 challenging levels. Find familiar faces from the series as these transformed supersized bosses take quite a bit of over-the-top battling to bring them down.
* Go Deep into SpongeBob’s Universe:
Revisit SpongeBob’s most memorable locations, such as downtown Bikini Bottom, the Krusty Krab, Jellyfish Fields, or even Rock Bottom as players experience all of their favorite characters from previous SpongeBob games and the TV Series.

SpongeBob Truth or Square is basically a 3d platform style game, there’s lots of jumping and running involved along with solving puzzles as well. Most of the game is fairly easy but some part can be difficult even for a seasoned gamer like myself. On one level I went through 20 lives just getting past one of the bosses, luckily though you can accumulate lives very fast and easily.

While you’re playing you’ll also run across special areas, these will be open after you complete the level once though. In these areas you’ll usually fight a bunch of Plankton’s robots to get a prize that’s usually a piece of furniture or decoration for SpongeBob’s house. 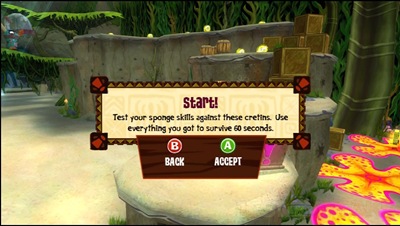 SpongeBob has several special moves as well, and power-ups like becoming a muscular SpongeBob where his attacks are much more powerful. When he’s regular SpongeBob his main attack is turning into a spatula and flattening enemies and he has a spin attack that turns him into a bunch of spinning spatulas to quickly get several hits in. When’s he’s powered up the spatula attack turns into a large powerful hammer, and the spin attack looks like a propeller. He can also turn himself into a water balloon cannon, or soak up water and grow to 3-4 times his size to shoot water at his foes. There’s many secrets in the game as well that you’ll have to figure out as you play, at the end of each level you’ll get a score and it will let you know how much you’ve accomplished and if you’ve missed anything or not. 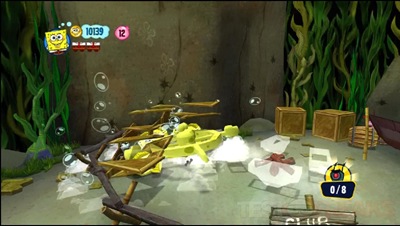 As you’re playing you’ll get hit and lose life as expected, the power ups for more life are underwear, you’ll need to collect them to regain life. 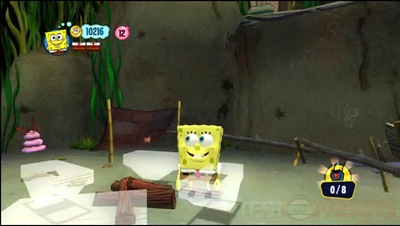 There are several types of puzzles in the game including many timed ones where you’ll have to get somewhere before time runs out. You’ll use all of SpongeBob’s abilities to complete the puzzles, and some you’ll need to be the muscular SpongeBob to complete. All of the levels vary quite a bit, they’re bright and colorful, and wild and zany. You’ll find things like wads of bubble gum that you’ll need to get into to get from one place to another, it’s interesting to say the least. 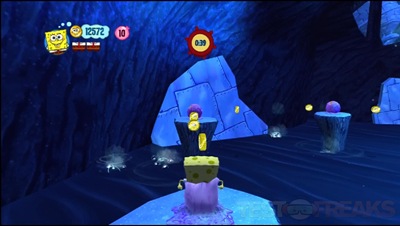 As you’re playing you’ll collect coins that can be used to buy things for your home that are missing or upgrade things already there. That part doesn’t have much to do with the actual game, but you can earn accomplishments for furnishing your home or pineapple, whatever it is… 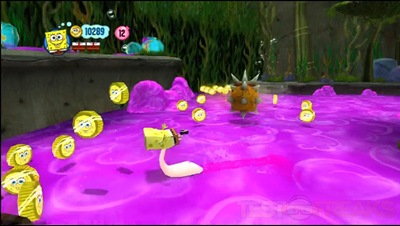 It’s a kids game and my kids love it, but I had a lot of fun playing it actually. My kids love it, and the co-op mode as well, it’s definitely a game to get for any SpongeBob fan. My kids had no problem picking up on it and figuring out what to do, even my 4yr old was playing as well. There are some spots in the game that are fairly hard, and can be frustrating, like moving walkways that teeter-totter with steam pipes under them so you’ve got to have very good timing. Overall though my kids enjoy the game very much, and it’s well worth it for them.

If you’re kids are SpongeBob fans then this is a must have game for them. It’s fun, comical, wild and colorful, and not exactly violent. Sure there’s cartoon violence but it’s done in a way that makes kids laugh. It’s a great, safe kids game really that adults might even enjoy as well.

Pros:
+It’s Spongebob!
+It really is a fun game
+Comical, colorful, kids should love it

Cons:
-Bad, bad camera
-Some areas can be very hard, especially for children
-Can be repetitive