Casual games are great little time wasters really that everyone can enjoy. These types of games appeal to everybody really, and most of them would be considered family type games so there’s a very large fan base for them out there. Pop Cap games is a company that specializes in casual types of games, and they’re well know for their excellent games. Today for review I’ve got the newest game from Pop Cap called Zuma’s Revenge!, it’s the sequel to the original Zuma. In this second game Pop Cap has brought high definition graphics, many, many more levels for literally many hours of game play, and really they’ve created a game that is fun for everyone. The basis of the game is matching colored balls, it sounds simple but it can get hectic as the game progresses and you move through the levels. At the end of each level you’ll even encounter a boss to fight as well. In addition to the main game Pop Cap has added several other game mode and a challenge mode. If you like casual games, then this one is one that you’ll certainly want to take a look at, I had a lot of fun playing and so did my family…

This is a download game so there are no box shots for you.

Once you load the game you’ll be greeted with the title screen and then you’ll move tot he menu screen. 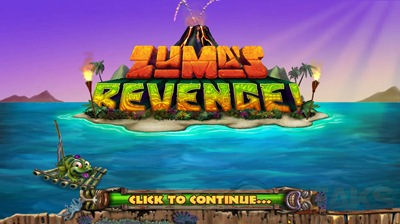 On the menu screen you’ll find several choices for game play: Adventure, Challenge, Heroic Frog and Iron Frog. Some of these won’t be available though until you complete the Adventure Mode. 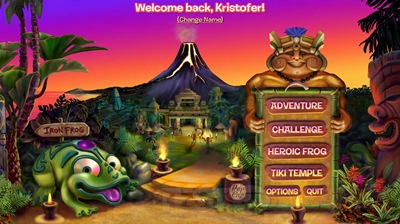 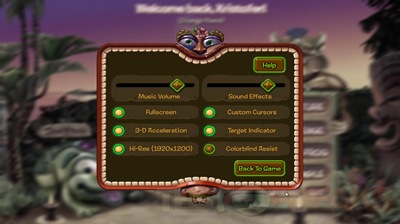 In the Tiki Temple you can take a look at your scores and progress: 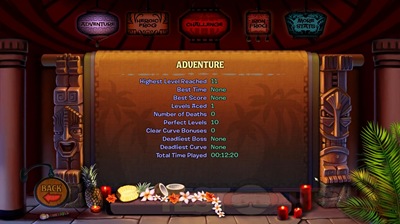 The ribbeting sequel to the ball-blasting classic!

Enter an all-new world of Zuma where evil tiki bosses rule the land! Conquer over 60 levels by firing stone spheres to make matches and destroy the deadly stream of balls, then take on six tiki boss battles and guide your agile amphibian to victory!

Leap into action in four game modes with explosive new features and amazing new gameplay: Slide and hop for smarter shots, hit targets for exotic bonuses, and detonate new power-up balls! Will you succumb to the perilous pitfalls, or can you tame the jungle in this PopCap ball-blasting challenge?

More About the Game
* Take on the tikis in four game modes: Adventure, Challenge, Iron Frog and Heroic Frog
* Score explosive power-ups including three new shots
* Explore new gameplay like lily-pad hopping, slide-aiming, and more
* Enjoy amazing graphics and effects and save your stats in the Tiki Temple!

Just so you know I did play this in HD mode at full 1920×1200. My gaming system has an ATI Radeon 4870 and it had no problems playing Zuma’s Revenge.
As I mentioned earlier the basic idea of the game is to match the colored balls, three of more make a match. You’re a frog that spits the balls out of your mouth. The levels will vary, sometimes you can be in the middle of the screen spinning around, or you may be at the bottom of the screen moving back and forth, or you might be able to jump from place to place on the screen, so things get mixed up a bit. 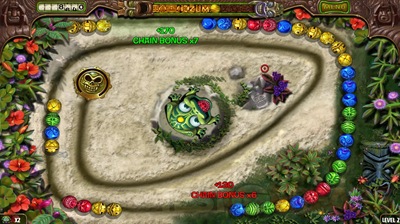 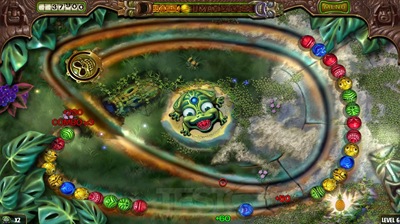 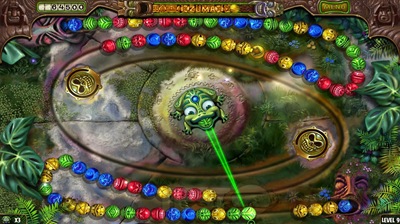 There are bonuses in the game as well, some of the balls will have special characters on them. You can have exploding balls, ones that slow everything down, ones that make everything move backwards, ones that let you shoot three balls and destroy many at once, and several others as well. You’ll also have bonuses for getting matches without missing, fruit will appear that you can shoot for a bonus and other bonuses as well.<

Each part of the island has 10 levels, if you die in the first few levels you’ll go back to the beginning, but once you get half way through you’ll have a save point and you can start there instead of all the way back at the beginning. 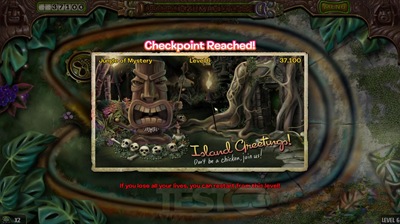 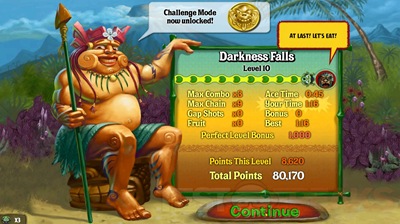 At the end of the areas you’ll get to fight a boss, one of the island gods or idols. 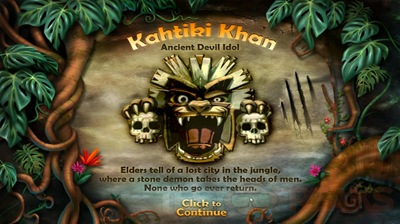 Once you beat the boss the next area will be unlocked for you: 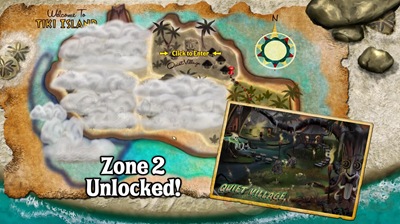 I’ve spent many hours playing Zuma’s Revenge already and still have not yet played all of it, you’re getting a whole lot of game for the price really.

Through the game you’ll find the comical stylings that we’re accustomed to from Pop Cap.

Zuma’s Revenge isn’t a violent game, so it’s one that’s great for the whole family.

I like this game quite a bit, I’ve found myself going back and playing it for a few minutes or an hour at a time just to get away for a bit, it’s great little casual game.

The only issue I have with this game is that it’s very repetitive, you’ll go through level after level of shooting colored balls and it will get boring after a while. On the other hand, one thing nice about a casual games though is that you can leave and come back to it later, so it’s not one of those games that you’ll sit and try to finish all in one day. I’ve palyed for many, many hours and still have not completed it, I go back from time to time and get a little more progress in the game. It’s a big game really that will take a long time to truly finish.

To finish this off I’ve got two game play videos for you:

Conclusion:
Zuma’s Revenge is truly a great little game. For about $20 you’ll get many, many hours of game play that will have you coming back for more and more.

In the realm of casual games, Pop Cap is a company that knows what its doing, it knows how to design a great game and it knows haw to give great value to the end user.

Pros:
+Many levels
+Lots of game modes and bonuses
+Lots of fun
+Great graphics
+Fairly easy to play
+Fun for the entire family
+Hours and hours of game play

Cons:
-Same stuff over and over again really