We all have habits and some are harder to quit than others and sometimes you just need a substitution for that habit. Yes I smoke, I know I shouldn’t, I’ve tried to quit but it didn’t work out well for all concerned. Technology though has allowed a different way to smoke and that’s the electronic cigarette that is similar to smoke but there’s no smoke. So today for review I’ve got something very different, it’s a starter kit from a company called V4L or Vapor 4 Life and it’s actual name is the Value Kit. It includes pretty much everything you need to get started on your way to sort of not smoking anymore. You’ll still be smoking but it’s not smoke it’s actually vapor which is safer for you and everyone around you obviously. No more second hand smoke and you get the oral fixation quenched and you get your nicotine fix as well. I’ll be honest it’s not the same as a real cigarette, but it’s better and I think it’s certainly worth a try if you’re not ready or even willing to totally quit. 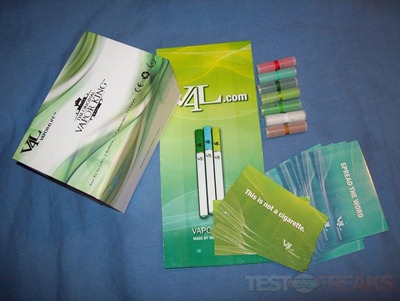 The little business card they sent over are rather neat. The first one says on one side ‘This is not a cigarette’ and then on the other it explains exactly what it is. These are basically for you to give out if someone is harassing you about ‘smoking’ near them or where you’re not supposed to. 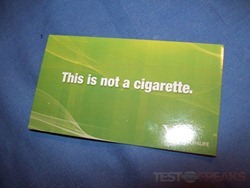 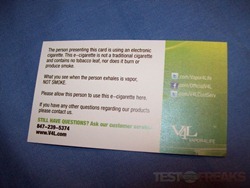 The other cards are similar but they’re more promo cards or advertisements really. 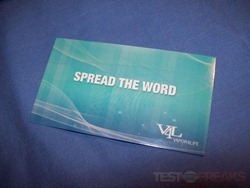 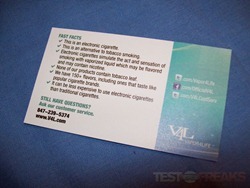 They sent me seven extra cartomizers of different flavors which are Red Energy, Dunhall Menthol, Vanilla Mocha Frap, Menthol, Kant Menthol, Kamel Menthol and Vanilla. This is just a sampling of what you can get, V4L offers many more flavors 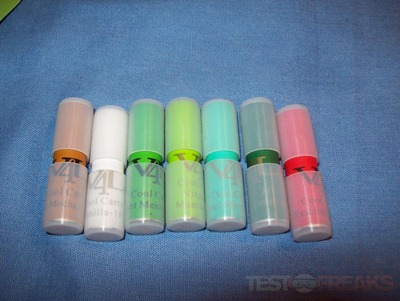 The box that the Value Kit comes in is like a gift box really, it’s nice looking and sturdy. 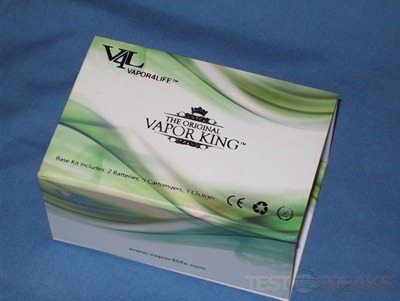 Inside the box you’ll find another box, a very nice carrying case, user guide, pack of cartomizers and a ‘membership’ card. 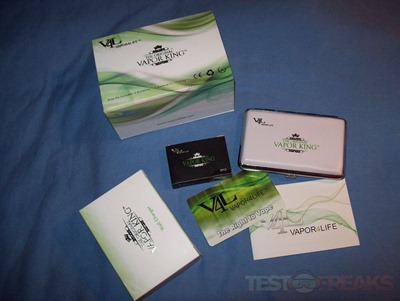 The carrying case is hard and sturdy with a metal spring lock clasp. The case is meant to hold two batteries and four cartomizers so you’ll be set for the day or night. The inside of the case is a felt like soft material. 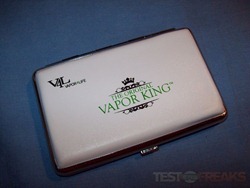 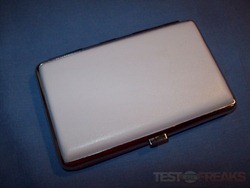 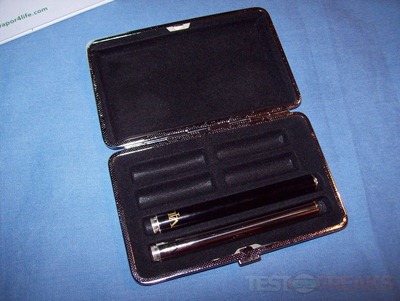 V4L offers many types of batteries and you can get them in different colors and actually ones with patterns on them. Thankfully they sent me plain black and a chrome one. 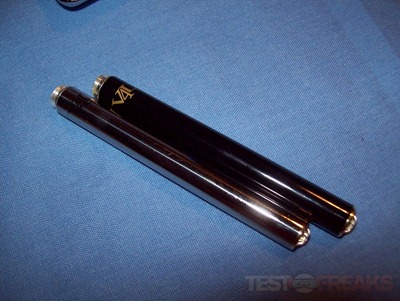 On the end is what looks like  a crystal, and behind it is an LED that lights up when you inhale. The chrome battery has a green LED and the black battery has a blue LED in it. The LED is also used to let you know when the battery is low, it will blink to tell you it needs charging. 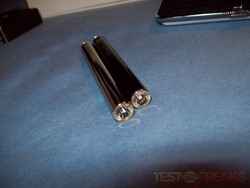 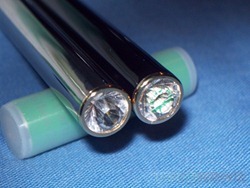 The other end is threaded so you can attach the cartomizers. 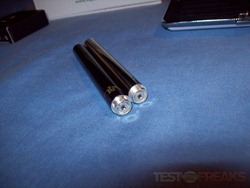 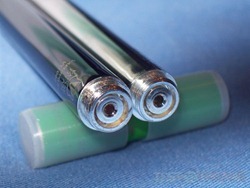 The small black box is where you’ll find the cartomizers. When you order the kit you can choose what you want, I smoke menthol so that’s what I picked. Each cartomizer has silicone caps on both ends for protection and to keep them fresh. 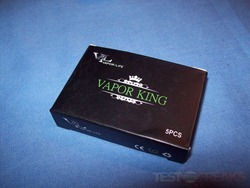 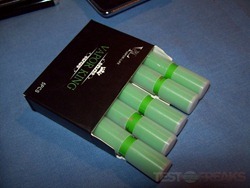 The cartomizers are metal and plastic and they’re not hard but they’re not soft either, sort of in between. They do have a little bit of give to them, but not like a real cigarette. The one end has the hole on it and the other is threaded to mate with the batteries. 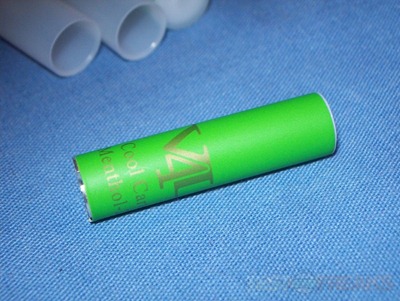 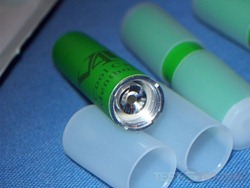 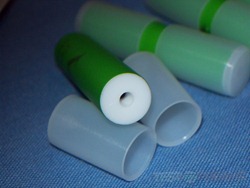 In the small white box you’ll find the charger, it’s powered by your regular outlet. To use it you screw the battery into it and let it charge. The initial charge is 8 hours then after that it should only take 3-4 hours for a full charge. 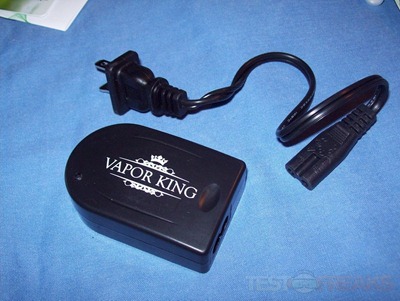 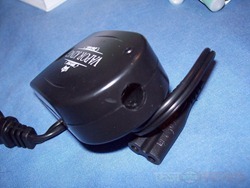 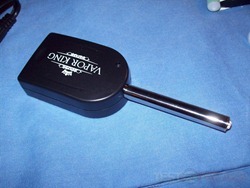 Once you’re all charged you can then put the cartomizer onto the batter and you can start vaping. Yes it’s called Vaping and not smoking. 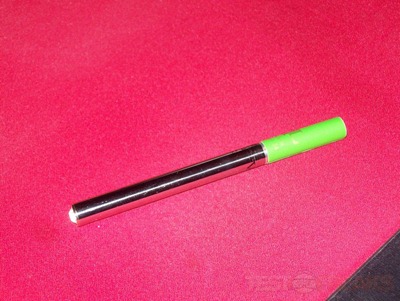 The first thing I noticed when I started using this was that they’re heavy, and they’re also much larger than my normal cigarettes. 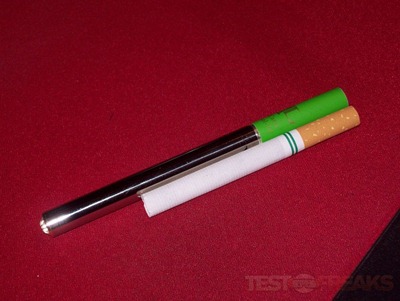 The weight is just something you’ll have to get accustomed to obviously, as is the size depending on what kind of cigarettes you smoke. The ones I smoke are from a box and are the smallest you can can get really.

The next thing I noticed was the taste of the cartomizers. It’s totally different than my normal cigarette but then again I expected that. The flavor of the menthol ones is interesting, it’s rather sweet actually.

One small thing I have to say is that the flavor doesn’t seem to last as long as I thought it would. The E-Cigarette cartomizer does last a long time it seems to last longer than the flavor does. No, that’s not quite right, there is a very slight flavor, but nowhere near as strong as when you first start vaping.

Something  that’s great about these is the fact that they produce a lot of vapor, and I mean a lot. It’s pretty much like you’re smoking but it can be harsh when you first start vaping, I did cough a few times when I got started.

The battery life is very good. Two batteries fully charged should last you an entire day with normal vaping.

I tried the other cartomizers they sent, and honestly menthol is my thing, I don’t care much for other flavors. That’s just me though, you might like grape and cherry and vanilla and mocha. If I smoked anything different it was clove, and that was the extent of it.

This kit is priced at $49.99 and there are other kits, more expensive ones that include more accessories. It all depends what you want to get started with really.

The price of this kit is $49.99 and for what you get I think it’s well worth it. It’s a nice way to get you feet wet as it were with the whole e-cigarette thing.

I’m not too sure about the LEDs on the batteries, especially blue and green, red and orange I could see but other colors don’t work for me.

Oh, and just a reminder, V4L sent me some other accessories as well, so be sure to look for them soon.