Ok, so we’re back with another Steam game giveaway and this week it is Hard Reset Extended Edition. The game is a single player shooter style game with a cyberpunk theme to it with some great looking graphics and very good reviews on Steam. The Extended Edition also included the Exile DLC which adds new content and extends the story. Winning is simple, read on to learn more.. 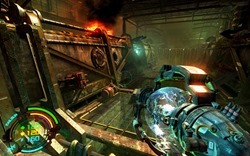 Over-the-top destruction, loads of enemies & a beautifully realized cyberpunk setting. Hard Reset is here to shake up the shooter scene.

In the only remaining human city of Bezoar, Major Fletcher, an Army Combat Veteran and soldier of the CLN, is dragged into a conflict between two of mankind’s greatest enemies. He is to discover that nothing is what it seems to be.

Hard Reset is an action-packed, single-player shooter for the PC. With over-the-top destruction, loads of enemies, great weapon variety and a beautifully realized cyberpunk setting, Hard Reset is sure to shake up the shooter scene.

One winner will be picked at random via Rafflecopter random pick system when the contest ends.
Contest runs Sunday to 11:59 PM Saturday, winner announced Sunday following contest end and code will be sent to winners registered email address.

The game code is for Steam so you must be a Steam user to use the code or you must install Steam.