Whether you’re a Bingo newbie or a seasoned player, you’ll know that there’s something truly unique about the online game. It’s as entertaining and thrilling as its land-based counterpart, and you can make your experience as sociable as you like. Some play – of course – to win some real cash, while others are looking to make friends and will engage in all the online chatrooms. 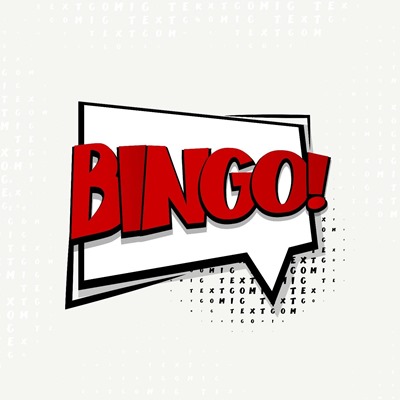 Bingo hall regulars will be more than familiar with the lingo – that is the Bingo number calls. But playing online, you’ll find no end of new terminology, acronyms and phrases. Read on to find out about some of the most commonly used ones – consider this your glossary to Bingo online!

3 to go, 2 to go, 1 to go… Bingo! Players will use these acronyms to signify how many numbers they have left before they win the round. It doesn’t matter whether it’s one line, two lines, a pattern or a full house, knowing that one of your roomies is close to winning builds the tension. Seeing players announce how many numbers they have left is a good indication for you to compare how your game is going.

Online Bingo communities are very supportive and you’ll often see players congratulating each other after a win. WTG stands for ‘way to go’, but you might also see WD (‘well done’) being used when a player has announced they’ve won the round or game. It’s also an expression used frequently by the chat host or moderator, who’s on hand to keep the conversation flowing as smoothly as the games themselves.

While this isn’t a chat acronym as such, or frequently used in Bingo chatrooms, newbies will no doubt be scratching their heads and wondering who Ted is. Well he’s not a person. T.E.D is the automatic daubing system that the games use. In short, if you have lots of Bingo cards for your chosen game and don’t want to try and tick off the numbers manually, you’re able to turn the auto-daub function on and the software will do it all for you. So as soon as your winning numbers come in, you don’t need to be scrambling about and you’ll be notified as soon as you win.

Roomies are the other online players who have entered the game/chat room. You might see players greet each other with “Hi Roomies” or “See you later Roomies”. The chat host/moderator will also refer to their lobby dwellers as Roomies – particularly when introducing a new chat game.

They say the early bird catches the worm, and that expression is relevant to Bingo too. Unlike dedicated Bingo halls, online Bingo runs all day. You might find games being played first thing in the morning and chances are, they will be less popular than ‘peak’ time games. But other early-bird games will be played at more reasonable hours and these are considered the first game and the warm-up to the real thing.

By stark contrast, moonlight Bingo games are run towards the end of the day. The evening can still be peak time for players, but consider anything later than 10pm moonlight. You’ll notice that as player numbers reduce, the jackpot and any other winnings will be reduced too. So, if you fancy your chances, these could be a good kind of game to enter – although they will be much less social.

As we mentioned earlier, all games will have a host or moderator, whose name in the chat will be abbreviated to either CH or CM. The chat host acts as the caller and moderator, also offering other additional forms of entertainment. They will be on-hand to answer any questions (or guide you to the FAQs) and keep games and chat flowing.

Online Bingo chat room lovers will be more than familiar with chat games, but they are a bit of fun in between games. There are many different kinds of games available and your chat host will explain the rules before and potential prizes before they get underway. As you’d expect, most of them will be word or number games. They are a great way of maintaining player engagement.